The possibility of using PIC in CSP process

PIC is a soft photoimageable solder resin that can replace the conventional coverlays currently used on flexible printed circuit boards (FPCBs). PIC's chemical structure is mainly composed of soft epoxy acrylic resin, a type of material that has long been used in FPCBs; its heat- and chemical-resistance and flexural strength have also been generally recognized. Due to its characteristic softness, when being mounted, it hardly creates bubbles and does not crack even when the substrate and the chip have different stress levels. PIC will change its flexure along with the stress difference.

Compared to the conventional coverlay or photoimageable dry film, PIC has the following advantages:

1. Creates holes by photoimaging, which does not need die-cut and is highly precise, low cost and time efficient.
2. Simple, quick, eco-friendly; saves power and human resources.
3. Not as rigid as conventional polyimide (PI) films, giving it better flexibility to prevent rebound during static bending.

Because most FPCB applications involve static bending of connections between electronic components, the rigidness of the PI film in conventional coverlays will increase the substrate's rebound strength. During the lamination process using the anisotropic conductive film (ACF) for such products as LCD modules (LCMs) or touch panels (laminating the FPCB to the glass), the rigidness of the PI film will make it difficult to solve the problem arising from the remnant stress after assembly. This will reduce the reliability of the products after assembly. PIC does not have such an issue. Therefore, the lamination process for electronic products using ACF should avoid using PI films and instead PIC should be used.

1. No need for screen printing; clean and odorless; consistent film thickness.
2. Resolves the difficulties of hole-plugging when applying liquid ink onto double-sided or multilayer FPCBs.
3. Its flexural strength is similar to that of FPCB photoimageable ink, but it features better photoimaging ability and chemical resistance.
4. Quick developing, and short cure time during post-bake.
5. Does not include silicon oil-based defoamer, so there will be no pollution problem at the edge of the PCB pad; neither will it pollute the immersion gold and gold plating baths.

1. PIC eliminates the processes of cutting, drilling and punching for PI films; increases efficiency and reduces costs.
2. Enhances the alignment accuracy for the coverlay's fast-press process. The accuracy is improved from 0.1mm to 0.075mm.
3. Capable of resolving the excessive glue issue as it adopts the photoimaging method for opening and therefore the glue will not overflow, reducing the excessive glue issue from 0.1mm to zero.
4. PIC directly replaces fast-press and WF, reducing process steps and increasing profits.
5. Capable of resolving the problem of poor sealing during the WF process.

Lamination is the most important step deciding the success of PIC process; preventing bubbles from emerging is the most crucial issue. Once the lamination is finished without creating bubbles, the whole PIC process is already half-completed. As for how to prevent bubbles from forming, the hot-press temperature has to be low. TeamChem Material Chairman Dr. Todd Yeh suggests that 70-80 degrees Celsius be the basis. When a circuit layout is more symmetrical, the standard dry film laminator can be used. But if the layout is not symmetrical or the circuits are too dense, vacuum fast-press equipment may better serve the purpose. Dr. Yeh also calls attention to certain precautions that should be taken during the exposure and developing steps. When under-exposed, large areas of peeling off may easily occur to the coating after the immersion gold process; and too much exposure will make the coating brittle. The exposure should be set at levels 9-13 of the Stouffer 21-step photo-guide.

TeamChem Material Chairman Dr. Todd Yeh points out that the company's PIC is made under a low-temperature environment, ready for production at FPCB makers' existing facilities, and priced below NT$400 per square meter. The company already completed pilot production in early 2013 and is preparing for volume production and shipments. Currently, R&D engineers from FPCB makers have been testing TeamChem's PIC products for adoption by tablets, communication antenna FPCBs for smartphones, and FPCBs for light bars. Commenting on the development of PIC applications, FPCB engineers have pointed out that the conventional method has at least 11 steps - microetching of circuits, layup, lamination, baking, punching, abrasive blasting, photoimageable solder mask applying, pre-bake, exposure, developing and post-bake. But after adopting the new PIC, there are only five steps – microetching of circuits, lamination, exposure, developing and post-bake - saving work, time and manpower. The PIC is a great help for FPCB makers who need to compete for orders through cost-down efforts. 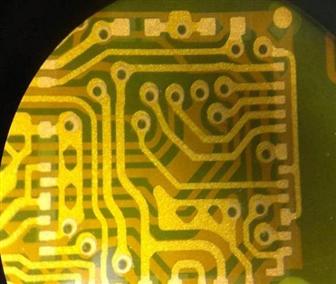