The first generation Wi-Fi launched 15 years ago brought forth wireless LAN (WLAN) applications, and the newer Wi-Fi standards that ensued have been providing faster transmission to notebooks, smartphones, and tablets. Over the past few years, Wi-Fi has even become available to consumer electronics and peripherals.

In terms of the emerging home applications, however, Wi-Fi 802.11g and 802.11n in the existing 2.4GHz band can no longer meet the requirement for HD streaming video transmission. As a result, 5G Wi-Fi - faster than 1 Gbps - is forthcoming.

The trademark of 5G Wi-Fi can be noticed at the exhibition halls of Computex 2012 and on the shuttle buses for the event. This is what Michael Hurlston said at his key note speech for "Computex Taipei Digitimes Tech Forum 2012 - Mobile Technology." Hurlston is Senior Vice President and General Manager of Wireless Combo Connectivity Line of Business, Broadcom. He also noted 5G Wi-Fi-related products exhibited by some companies at Computex.

Why is there the 5G Wi-Fi standard? What are the benefits of the standard? According to Hurlston, Wi-Fi dominates all the applications of digital home devices and every consumer needs Wi-Fi. According to a Broadcom survey of about 1,000 people in America, 60% of the respondents said that they cannot do without Wi-Fi on any single day; 39% said that they are willing to give up drinking coffee for one month in exchange for Wi-Fi; and 50% are willing to give up Facebook for one month in exchange for Wi-Fi.

Videos amounted to 29.5% of the global network traffic in 2009, and the percentage increased to 42.7% and 53.6% respectively in 2010 and 2011, but the explosive growth of videos is just beginning. According to VNI's statistics and forecast in June 2011, more than 50% of the global network packet traffic comes from video transmission and network streaming traffic alone exceeds 1 ExaBytes. By 2015, the percentage of online video traffic is expected to exceed 91% and 7 ExaBytes, four times of the traffic in 2012.

When Wi-Fi 801.11n - the mainstream standard at present - was introduced in 2007, continuous transmission of massive streaming videos of high definition as required by today's mobile devices and consumer electronics had not been expected. As a result, 5G Wi-Fi is the only solution now.

Hurlston pointed out the features of 5G Wi-Fi as the following:

(3) Wider network coverage that is three to four times of the existing 802.11n to reduce dead spots.

In terms of file transmission, 5G Wi-Fi enables less packet synchronizations than Wi-Fi 802.11n. It was clocked onsite that transmission of a video of more than 900MB by a 5G Wi-Fi device took only 33-40% of time required for transmission by a 802.11n device. 5G Wi-Fi - because of its speediness and power efficiency - is very suitable for mobile device video transmission.

According to Hurlston, Broadcom debuted its 5G Wi-Fi chipset at CES 2012. The dual-band chipset, which supports 2.4G/5GHz and meets the 802.11ac standard, has won support from wireless network equipment suppliers. Netgear has been the first company supporting 802.11n/802.11ac by launching its A6200 USB adapter as well as R6200 and R6300 wireless routers. Other wireless router and multimedia bridge products launched later to support 5G Wi-Fi include Buffalo AC1300, Air Station WZR-D1800H, and WLI-H4-D300H. Broadcom has become the first ever 5G Wi-Fi equipment supplier in the physical market.

The China-based Datang Telecom Technology has announced its 5G Wi-Fi access device adoption. Asustek Computer has announced its RT-AC66U router across 2.4G/5G with the 2.4G band (802.11n) supporting transmission at 400Mbps and the 5G band (802.11ac) supporting transmission at 1,350Mbps. A total bandwidth of 1,750Mbps is available for transmission. Hurlston also mentioned the availability of upcoming wireless routers such as D-Link DIR-865L, Belkin AC1000 and AC1200, Tenda W1800R, and EDIMAX BR-6673AC.

Hurlston noted that a complete 5G Wi-Fi ecosystem is being established, for example, ASUS G75VW shown at Computex is the world's first ever gaming notebook with 5G Wi-Fi built in and ASUS P8Z77V motherboard also has 5G Wi-Fi built in.

According to Hurlston, the core products with 5G Wi-Fi built in for the first half of 2012 are wireless routers and notebooks, and there will be backbone devices of wireless routers each equipped with two or three antennas in the second half of this year. In the first half of 2013, 5G Wi-Fi will become available to desktops, laptops, smart TV, and set-top boxes. In the second half of the year, it will become available to every type of mobile devices including smart phones, tablets, game consoles, and digital cameras.

It is Hurlston's expectation that there will be more choices of 5G Wi-Fi applications and devices to provide better experiences. The latest 5G Wi-Fi guidelines and industry news are available at: http://www.5gwifi.org/ 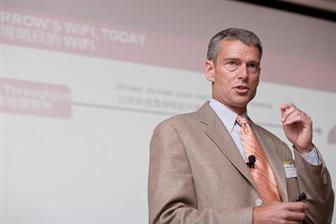