In response to enthusiasm for lighter and thinner ultra-mobile devices (UMDs) like smartphones, tablet PCs and ultrabooks, memories inside these devices (DRAM, flash) have also evolved in terms of speed, interface standards and forms of packaging toward a future convergence of system software and data storage applications.

Yu pointed out that most smartphones, tablets and ultrabooks adopt eMMC, eMMC/SSD and SSD/HDD for data storage, while LPDDR, LPDDR/DRAM, DRAM are used for DRAM. For hardware and platforms, most smartphones adopt ARM plus Android or the upcoming Windows on ARM (WOA), and tablets can choose among ARM plus Android, Wintel and WOA.

As for the development of memory/storage technology, the 200MB/s eMMC 4.5 will be upgraded to eMMC4.51 (still 200MB/s) with enhanced information security capability for future serialization of UFS 3Gbps (upgraded to 300MB/s). Mobile DRAM will move from 3.2 GS/s of LPDDR2 to 6.4 GS/s of LPDDR3 before ushering in 6.4GB/s from the Wide I/O interface. SSD will advance from existing SATA2 3Gbps and SATA3 6Gbps to multi lane PCIe interface design.

Yu pointed out that in addition to light weight and thinness, cost competitiveness is the biggest consideration for wide application of NAND flash in consumer electronics products. The evolution of semiconductor manufacturing processes reduces the unit cost year by year. A new process appears nearly every year: last year's mainstream 3xnm process for NAND flash is migrating to 2xnm and even 1xnm in an evolution even faster than Moore's law. Moreover, the introduction of multi-level cell (MLC) technology is leading the cost down further. 2-bit-per cell is the mainstream now, while the even cheaper 3-bit-per-cell is already used in some applications.

The sleep mode offers a switch between standby and sleep modes to save energy. With the reliable write feature, data can be secured even during power outage. Replay protection memory block (RPMB) offers code protection that requires passwords and keys for access. The multiple partitions function can help switch between different OS boots for different partitions and designate a specific partition for RPMB protection.

As for other additional commands, discard can help the host define invalid blocks of memory; sanitize commands can completely erase the physical blocks where the data is stored in order to avoid information outflow even after deleting personal data; packed commands can categorize to-be-executed commands according to their operating characteristics, and put them into packets for efficient batch execution in a bid to enhance overall operating efficiency of the system; data tag can tag storage data according to access and hit frequency and enhance the system's process efficiency; with power off notification, the host controller will inform the eMMC controller chip when devices are about to suffer a power outage, so that the controller chip can respond in advance before the outage.

In terms of UFS frameworks, the M-PHY physical layer of Mobile Industry Processor Interface (MIPI) followed by vendors ranging from cell phone makers to supply chain suppliers has achieve backward integration with UniPro interface (CSI-3, DSI-2, UFS) as well as support and processing capability for SCSI command set that is currently available for SATA SSD only. UFS integrates all benefits of SSD and eMMC, and its specs are especially developed for high-performance UMDs. Now UFS 1.1 specs can achieve 3Gbps transmission speed, and the upcoming UFS 2.0 will go further to reach 6Gbps.

As UFS is totally different from and incompatible with existing eMMC interfaces, related supply chains are still incomplete despite UFS 1.0 was released way back in 2011. Yu forecast that eMMC will remain mainstream in the market by 2013, while UFS in engineering samples/prototypes is expected to appear by the end of 2013 before appearing in small amount in the market by 2014. As UFS is targeting the high-end market due to the cost factor, UFS and eMMC will co-exist in the market for a while.

Concluding with Kingston's roadmap for UMD memories, Yu said his company is scheduled to launch a series of comprehensive memory solutions for smartphones and tablets in 2012. For high-end smartphones and tablets, eMMC v4.5 products will be released in 2012 in capacity ranging from 4GB to 64GB before upgrading to eMMC v4.51 with 4-128GB capacity in 2013. UFS 1.1 or 2.0 products will be officially launched in 2014 with capacity ranging from 64 GB to 256 GB.

As for mid-end smartphones and tablets, since mid-end smartphones' CPUs are not suitable for package on package (PoP) and using independent eMMC chips and LPDDR chips will take up too much space, Kingston will use the MCP packaging method and provide in 2012 or 2013 chips (eMMC 4.5 + LPDDR2 MCP) where eMMC v4.5 and low-power DDR2 are packaged together. The product line, specifically designed for Android 4.0 mid-end smartphones, can simultaneously achieve cost efficiency and performance. In response to China's demand of nearly 120 million low-end, entry-level smartphones in 2012, Kingston is offering NAND+LP DDR MCP products that package NAND flash chips with low-energy DDR from 2012 to 2013. The products have been validated by major smartphone chip vendors and already start shipping in May. 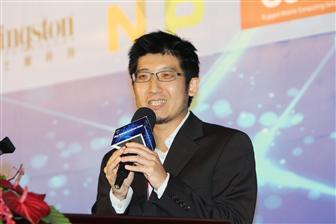