NAND flash memory is among the key components used in today's popular consumer technology products. The birth of NAND flash could be credited to two Bell Labs researchers who fabricated the world's first floating-gate nonvolatile memory (NVM) memory device. Simon Sze was one of the inventors.

Along with William Shockley's discovery of the transistor effect, and integrated circuits invented by Jack Kilby and Robert Noyce, Sze's invention with Dawon Kahng of floating-gate NVM devices was one of the major breakthroughs in semiconductor technology.

However, with consumer habits changing, the DRAM business is now encountering a shrinking market for traditional PCs. Sze indicated that the market for NAND flash chips had not been practically developed until the 1990s when mobile phones started to be widely used.

NAND flash is one of the NVM types, which can keep stored data when a device's power is turned off, while DRAM functions more like the "working memory" in a computer, Sze said. Both have their own expertise to satisfy different market demands.

Unlike DRAM chips that immediately replaced magnetic core chip technology as the main computer memory when first introduced, NVM memory devices were not commercialized until about 20 years after their debut, Sze observed.

Floating-gate NVM devices were introduced in 1967, and first used in end products in 1984, Sze disclosed. The memory was adopted by Nintendo in its gaming devices to automatically retain the stored information so that players can move onto the next stage, Sze said. Floating-gate devices were also first equipped into BIOS chips to speed up the boot process for PCs.

Floating-gate NVM memory started to see its wide adoption during the 1990s when demand for handsets and memory cards boomed, Sze pointed out. Memory cards using NAND flash for storing photographs began to pose a threat to the market for traditional film products, Sze added.

The popularity of Apple's i-series products does mark a turning point for NVM memory, according to Sze. The market for NAND flash memory has expanded its size big enough to challenge that of the DRAM market. According to statistics, more than 30 billion electronic products using the float-gate memory have been shipped, and the total accumulated number will top 80 billion units within the next 10 years, said Sze.

Looking forward, it is anticipated to see a new memory technology to replace floating-gate devices, Sze indicated. But the floating gate memory should maintain its presence for at least 20 years. A number of new "unified" memory devices - which come with high-speed, high-density and non-volatile features - are still in their early stages of development, Sze said.

In addition, Sze commented that the market for NAND flash will be driven by its diversified applications - from digital cameras, flash drives to smartphones, SSDs and future technology products. Demand for NAND flash will boom thanks to the memory's high density, low power, non-volatile, rewritable and small size.

Sze also suggested that the Taiwan semiconductor industry should enhance its relationship with China in order to stay competitive. The government should adopt a more open policy to attract talents and investment as the development of the island's economy and industry should not be disrupted by political issues, Sze urged.

Sze made the comments during his recent presentation at National Chiao-Tung University (NCTU), Taiwan. 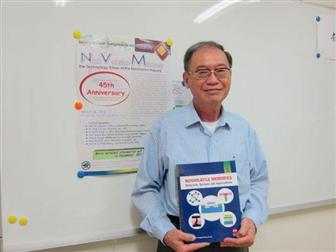