With Chilisin possessing technical expertise in areas such as Design in and Formulation, the company is capable of quickly reacting to market demand and supplying a series of related product and service to its clients. For example, although Chilisin only started investing in its low profile molding choke business in 2010, the company has already developed a full series of specifications for its product line, ranging from 6.6 x 7.3 x 1.8mm to 3 x 3 x 1.2mm for use in portable electronics devices.

Already thin, but needs to be thinner

With the IT market trend being end products becoming thinner and lighter, as well as modular, Chilisin has not only been focusing on miniaturizing its inductor products, but also focusing on the R&D to enhance precision and reduce power consumption of inductor products, such as the 0805 multilayer power inductor, ultra low DCR wire wound power inductor and thin-film technology-based 0201 ceramic RF chip inductor.

Demand for thinner and lighter inductor products can be seen in Chilisin's sales results. The company's sales of 0402 multilayer inductors have increased close to 40% growth compared to the first half of 2010. So, in addition to becoming more aggressive in making its inductor products thinner and lighter, Chilisin also started cooperating with power module makers and is set to launch inductor-integrated power ICs to supply to end-use electronics device players. 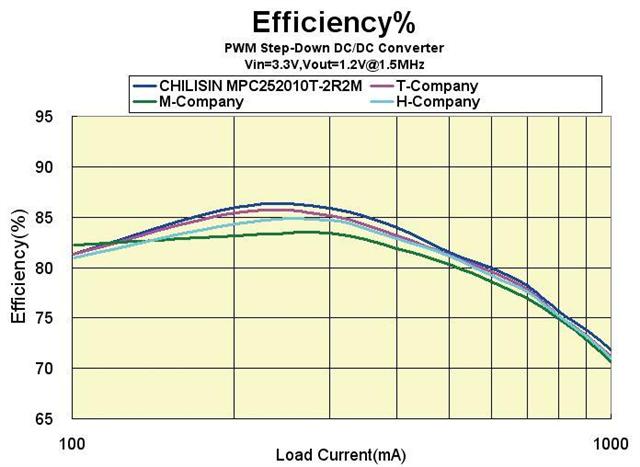 One of the major reasons that Chilisin has been recognized in the IT market and has become a first-tier inductor maker is because of its comprehensive product range. Chilisin's RF, power and EMI solutions can all be adjusted to perfectly match the requirements of different electronics device applications, while the company is also capable of fulfilling its clients' specific demands, such as miniaturization of inductor products, says the company.

After evaluating Chilisin competitors' product lines, it becomes clear why the completeness of Chilisin's inductor product lines is allowing the company to compete at the same level against other first-tier players, while providing even more complete product lineups than competitors. The company's molding power choke and multilayer power inductor businesses, which just started 1-2 years ago, already has an absolute advantage against some first-tier players. 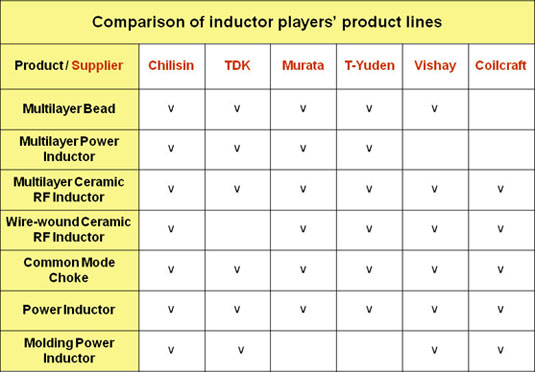 "Our strategy is to allow our clients to be able to purchase all inductor products and services needed directly from us, a one-stop-shopping service, and in the future we will treat this business model as a foundation that can be expanded through offering even more new services that match the trends in the IT market," noted the company, while adding that "Chilisin's complete product lines also enable the company to provide clients with the related services needed to support total solutions."

Replying to client queries within 24 hours and having strong synergy between its R&D and FAE teams ensure the quality of Chilisin's client services. Moreover, maintaining its competitiveness over price and developments of new product will continue through Chilisin's capability of producing key components such as ferrite powder and ferrite cores, as well as the company's high yield rate and stable product quality brought on by its fully automated production lines.

Chilisin pointed out that the company is operating its business with a strategy of "Follow The Trend, Go With The Winners" in the market. Therefore, in addition to developing its inductor products to meet demands of the latest market trends for electronics devices, the company can maintain its flexibility and supply leading players with the best-suited products.