Designed for driving internal and external data storage and other peripherals, the PS8521 devices are ideal for notebook, PC motherboard and computer docking station redriver applications, according to Parade. Both devices support 1.5Gb/s, 3Gb/s and 6Gb/s data rates, and both are compatible with industry-standard SATA3, eSATA and SAS (serial attached SCSI) protocols. Out-of-band (OOB) signaling is also supported.

The PS8521A and PS8521B automatically detect traffic on the SATA bus, transitioning into sleep mode when no traffic is present. When traffic is detected, the devices become active with less than 10 ns latency.

Programmable pre-emphasis enables the PS8521A and PS8521B to reduce signal jitter and optimizes the output 'eye' signal for robust transmission. These programmable features can be flexibly controlled either through an I2C port or directly through dedicated pin inputs.

Parade said the PS8521A and PS8521B are available in a 4x4mm 20-pin TQFN package. The devices are pin-compatible with a wide variety of SATA devices, allowing for rapid system design conversion to SATA3.

Both PS8521A and PS8521B are sampling now, and production volumes will be available in the third quarter of 2010, according to Parade. The devices will be sold for US$1.50/ea. in volume. 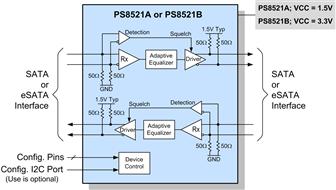