Toshiba America Electronic Components ( TAEC) has announced a series of solid state drive (SSD) modules using the latest generation Toshiba 32nm MLC NAND flash at the ongoing IDF 2009. The Toshiba SG2 modules are offered in two types, one of which is based on the new low-profile mini-SATA (mSATA) interface standard.

The new Toshiba SSDs are available in 30GB and 62GB capacities, with volume production slated for October.

The mSATA modules leverage the speed and reliability of the popular SATA interface, in a small form factor module (30x4.75x50.95mm) that connects to the system board using the low profile SATA connector. Adaptive power mode and SATA device initiated power management typically reduce power consumption to less than half of the read power level when the device is in idle, standby or sleep mode.

Citing IDC, mini-notebook shipments are expected to grow at an annual average of around 15% from 2009 to 2013, Toshiba said. PC manufacturers are thus looking for SSDs that combine small size with higher storage capacities and advanced performance. 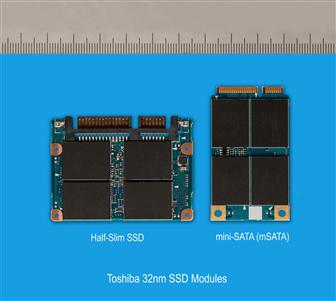