In addition to the performance leap over conventional HDDs, Micron highlighted the power and reliability advantages of P200. The drive operates at 2.5W in active mode and under at 0.3W when idle. It also provides improved wear-leveling capabilities across its high-performance SLC write cycles, offering a mean time between failure (MTBF) rate of approximately two million hours compared to 300,000 to 500,000 MTBF of an HDD. 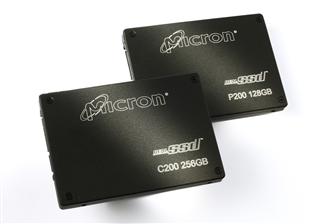