Shuttle recently introduced its K45 mini-PC barebone, based on the Intel 945GC chip set and supporting both power-saving and current dual-core processors.

Simplicity was of primary importance in the development of the K45, according to Shuttle. In contrast to the orientation of Shuttle's XPC-series towards covering as many application areas as possible, the K45 is entirely targeted in its functionality: whether as an office PC, (thin) client on a terminal server, a control PC for information stands, a cashier system or a home server, the platform-independence with respect to Windows and Linux is ideal, stated the company.

The mini-PC barebone also features Gigabit networking and has space for two hard drives. It can also optionally be equipped with WLAN.

Dispensing with an optical drive and front-side connections means additional security for your company, according to Shuttle. Company data cannot be removed and damaging software cannot be introduced in this way.

The Shuttle Barebone K45 is available now at a recommended price of 94 euros (US$144) before tax in Europe or US$99 in the US.

Shuttle is also planning to offer the KPC, a pre-built K45-based system which ships with Foresight Linux, Intel Celeron CPU and 512MB RAM, with US pricing starting at US$199. 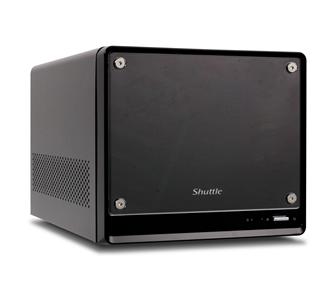