BenQ expanded its digital camera lineup with the super slim BenQ T800, an upgrade to the T700. The T800 is 14.9mm thin and features an 8-megapixel resolution with a 3-inch touch screen display, the company claims.

The face tracking function automatically detects and tracks up to nine faces and then focuses the lens to ensure the faces are perfectly presented in terms of color and clearness in the photos. The Z-lighting function is an in-camera photo editing function that adjusts the brightness of the subjects in backlit photos so that the subjects are clearly presented.

The camera includes a PictBridge function for direct photo printing via a compatible printer and supports SD memory card of up to 4GB. The camera is available in four colors: red, black, silver and white.

The BenQ T800 is planned to be available in Latin America, Europe and Asia Pacific starting from early October. 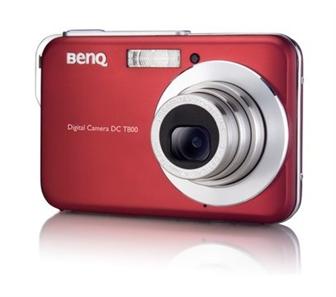