The NX8600GT Twin Turbo carries not one but two vBIOS chips; this allows MSI to provide two sets of core and memory clock settings - normal and turbo - which can be switched between using a button on the back-plate of the card. It reminds us of PCs from the 386 and 486 era which also had a button on the case to adjust system speed "on the fly".

At the end of the day while having two vBIOSes available could be useful as a safety net for the few who are brave enough to flash the BIOS on their graphics cards, having to manually press a switch all seems rather inelegant when the same could be achieved with a software solution. But still, we appreciate the trip down memory lane. 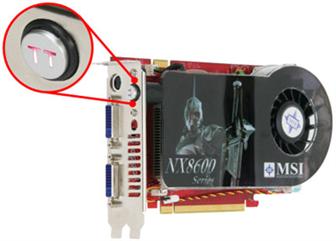