The Max4 2.5-inch eSATA and USB 2.0 enclosure fully complies with the eSATA standard capable of delivering up to 3Gb/s of bandwidth for ultra-fast data transfer. Included is a reinforced eSATA cable to further strengthen the unit's ability to guard against EMI (electromagnetic interference) and ESD (electrostatic discharge), noted Thermaltake. 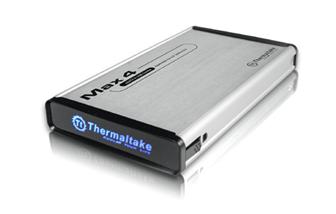