Gigabyte Communications has introduced two new handsets, the GSmart t600 with support for mobile digital TV, and the q60 professional handset with qwerty-keypad and 3.5G connectivity.

Rather than go head to head with the giants in the Windows Mobile-based handset market, Gigabyte Communications has instead chosen to focus on niche and consumer oriented markets, in particular mobile TV. In its first generation handsets the company introduced roaming analog TV, which it then followed up in the second generation with TV recording. The new t600 takes things a step further with support for digital TV standards – DVB-T and H allowing for fairly widespread coverage in Europe, Asia, South Africa and Australia, and which is schedule to grow in other parts of the world, in particular North America, before the end of 2007. The device also supports DAB radio.

To increase the benefit of having digital TV reception, the t600 is also the first Gigabyte Communications handset to feature a VGA (640×480) display. A side-by-side comparison of the t600 with an older model with a standard 32×240 screen showed that the higher resolution improved picture quality noticeably.

Another innovation that is introduced with the t600 is video-out which allows the device to be connected to a TV or projector to mirror the handsets display on the larger screen. Gigabyte Communications said that this feature can not only be applied to let users watch TV or video on a larger screen, but could also be used for events such as group presentations. The cable we saw was a USB-mini to composite version, but Gigabyte Communications also mentioned that S-Video may also be supported. Battery-life while watching TV is currently around two hours, but Gigabyte Communications believes that this will increase to three or four hours by the time the t600 launches.

The base operating system of the t600 is the recently released Windows Mobile 6 Professional, which includes the Mobile Office suite. Gigabyte Communications will also include its own value-added software bundle.

The t600 will be available in either black or white and will launch in Taiwan in April, followed by Italy and Russia in May, with northern Europe soon after. 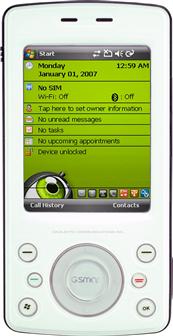 Gigabyte Communications' second new release is the q60. Aimed at the professional market, this handset features a full-qwerty keypad. The q60 is the company's first product to support WCDMA and HSDPA, offering speeds up to 1.8Mb/s. Although the q60 does not come with support for TV as standard, Gigabyte Communications mentioned that DVB-T and H can be added as a manufacturing option. GPS is also optionally available.

In order to make the best use of the q60's new features, Gigabyte Communications is working to cooperate with regional telecoms providers offering 3.5G services, who are likely to offer the q60 as part of a subscription package. The q60 is scheduled to launch in Taiwan in June, with trails currently underway in Europe with an aim for launches soon after.

As with the t600 the q60 is based on Windows Mobile 6 and Gigabyte revealed that this will be the standard for all of the company's future products. For existing owners, Gigabyte Communications is considering offering Windows Mobile 6 upgrade options, but nothing has been confirmed yet. The company has no plans to support other platforms (such as Linux) at this time as it receives good support from Microsoft. 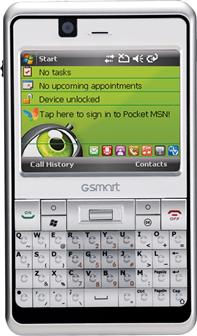