Microsoft announced plans to launch a 512MB memory unit for the Xbox 360 game console and an increase in the official size limit of Xbox LIVE Arcade games from 50MB to 150MB. The company made the announcements on March 5 at the Game Developers Conference (GDC) 2007, which runs in San Francisco from March 5 to 9.

The 512MB memory unit, available worldwide beginning April 3, 2007, will retail for an estimated retail price of US$49.99 in North America, according to Microsoft. The 512MB memory unit will be pre-loaded with the Xbox LIVE Arcade game "Geometry Wars: Retro Evolved" from developer Bizarre Creations for a limited time. The original 64MB memory unit will simultaneously drop in price from an estimated retail price of US$39.99 to US$29.99, according to Microsoft. 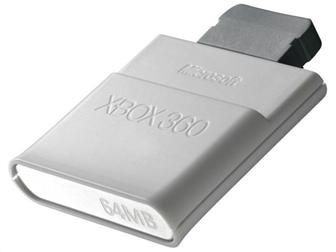 Microsoft's current 64MB memory unit for the Xbox 360. Microsoft recently announced that it will offer a 512MB memory unit to be available on April 3, 2007.
Photo: Company