The compact DSC-W55 and DSC-W35 models will sport 7.2-megapixel imagers and precision Carl Zeiss Vario-Tessar lenses. The cameras combine traditional, eye-level viewfinders with large LCD screens for easy framing and viewing of photos, according to the company. The W55 camera will come in Caribbean blue, pale pink, black and silver with a 2.5-inch LCD screen wrapped in a metal body, and the W35 camera will come in silver with a two-inch screen, noted Sony.

The new DSC-S700 and DSC-S650 cameras will also feature 7.2-megapixel imagers and will come in silver. The former model will house a 2.4-inch LCD wrapped in a metal body and the latter a two-inch screen.

On the W-series cameras, Sony's Clear RAW noise reduction technology helps reduce picture noise common to low-light exposures. Sony's AF Illuminator also facilitates these models' ability to shoot well in low light. A special light is thrown on subjects before taking a shot so that the camera's imager can better detect contrast, resulting is well-focused, clear pictures, even in low light, according to Sony. 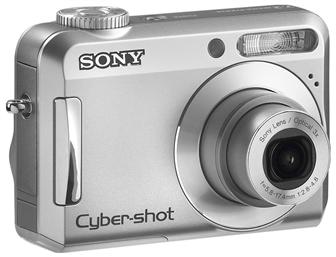