FiO Technology, dedicated to serving as a BaaS (Blockchain as a Service) platform for enterprises, has developed a new business model allowing corporate users to gain reward from business transfers without exposing their own secret business data, according to Geroge Chu, founder and CEO of the startup.

Chu continued that FiO draws its name from the abbreviation of "figure it out," seeking to help more enterprises explore blockchain application potentials in a convenient and low-cost way and faciliate their expansions in international markets.

Through the BaaS platform, enterprises can plug FiO's API (application programming interface) into their APP/Web to kick off blockchain applications without having to spend heavily on creating their own blockchain systems or alter their original computer systems, Chu stressed.

Chu said that FiO has completed its company registration in Singapore thanks to the country's friendly regulations and easier access to angel funds in the Middle East and Southeast Asia. The company has also set up its R&D base in Taiwan to capitalize on the abundant software talent supply, and established its strategy headquarters in Hong Kong. Such a deployment has given the startup more room to develop business in Greater China, Southeast Asia, and even Japan and South Korea.

FiO has developed patented bottom-layer technologies based on the open Hyperledger Fabric architecture in cooperation with IBM, and will promote its blockchain technologies and services to small and medium-size clients.

Chu stressed that FiO's BaaS platform is a hybrid chain combining both public and private chains, allowing enterprises to load only risk-free data of their own onto the platform.

The company has secured investments from Forbes Digital Asset and Israel's Infinity Leadway, and is enforcing a new round of fundraising seeking to solicit fresh funds of US$10-20 million from potential partners in Japan, Singapore and the Middle East, according to Chu. 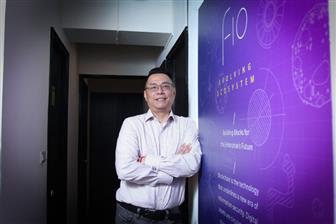