AMI partners with KingTiger to push computer reliability and performance

As developments in artificial intelligence (AI) and cloud services drive rapid industry growth and bring about a wave of products and services that highlight convenience and user needs, demand for computation power and system stability is also increasingly challenging. In response, developers are making more powerful operating systems and diverse software functions as well as new generation processors.

System performance and stability builds on top of memory reliability. However, with memory process technologies continuing on the miniaturization trend and new software applications keeping on evolving, all types of memory errors are prone to happen, resulting in system malfunction or failure which could have a negative influence on user experiences and brand reputation.

BIOS vendors have a far-reaching influence on PC system stability and performance. In an exclusive interview by Digitimes, PaiLin Huang, general manager, AMI Taiwan and Bosco Lai, CEO and executive president, KingTiger, talked about their collaborations to bring users a total solution to DRAM error detection and correction.

DRAM test equipment is a core business of KingTiger, serving major DRAM providers and users around the globe so the company has extensive knowledge about memory testing procedures. With growing popularity of mobile devices, memory products have transitioned from a modular form factor to being soldered directly onto mini motherboards and therefore application specific testing has become part of KingTiger's main services.

According to Lai, as DRAM process technologies trend toward miniaturization and capacities grow higher and higher, DRAM manufacturers have difficulty implementing comprehensive tests on their products. For example, DRAM design today has a less-than-one signal-to-noise ratio and manufacturers can hardly cope with problems like early wear-out, variable retention time (VRT) or frequent occurrences of errors with in-plant testing.

Some DRAM errors only occur when the memory is put to use under a combination of certain platforms and application scenarios. KingTiger's core expertise is its patented logic/system dual mode testing technologies. It is well aware that in-plant testing is unable to cope with the requirements by the slew of systems on the market so KingTiger leverages its thirty years of experiences in developing unique memory checking and correcting technologies to introduce a patented intelligent memory surveillance (iMS) software solution that works like the human immune system. It ingeniously conducts memory testing, scanning and checking when the processor is idling. When a section of memory is found to be defective, it is marked as unusable to ensure the memory system can continue to function normally. The complete approach to memory error detection, correction, diagnosis and handling includes comprehensive memory management functions such as inspection and failure isolation and warning. Memory reliability and performance is enhanced without occupying system resources, so it is called the memory system's silent guardian.

As a matter of fact, KingTiger iMS has had some impressive success stories mainly for its use in server systems in recent years. This is because server systems impose much more stringent requirements on performance and stability than PC. For example, Inspur adopted KingTiger's iMS solution in its Tiansuo M13 in 2017 and was able to reduce system instability resulting from memory errors by 95%. Such significant improvement gave rise to positive market reviews on Inspur servers and also provided a stage for KingTiger iMS to excel on.

PC manufacturers and leading brands cannot afford to overlook memory risks. Outstanding achievements of the iMS solution enabled KingTiger to enter into collaborations with AMI and further expand into motherboard, computer assembly, computer brands and white-box markets with AMI BIOS. Commenting on the partnership, Huang indicates the two companies share the common objective to boost computer stability and make benchmark progress. AMI chose to engage in collaborations with KingTiger in the early development of its major BIOS products in an attempt to shorten customers' R&D cycles. This will allow users of AMI BIOS to experience iMS Lite's capabilities in memory error detection and correction and also give added values to AMI's line of BIOS products.

If users wish to upgrade to the full version iMS, they can choose iMS-enabled DIMMs or purchase KingTiger solutions online in the future. The full version iMS solution provides around-the-clock uninterrupted operation and further features memory failure warning. Based on KingTiger's smart algorithm, the solution can calculate parameters that can accurately indicate imminent memory failure and initiate preventive actions, so system stability can be enhanced significantly to provide a high-quality computer system with self-correcting memory, thereby delivering premium user experiences.

At Computex 2018, AMI plans to showcase a full spectrum of BIOS products and KingTiger iMS Lite at booth L1332 on the fourth floor at Nangang Exhibition Center. AMI customers, partners and Computex visitors are all welcome to the AMI booth for a firsthand experience on amazing AMI innovations.

Note: KingTiger and AMI have successfully integrated Memtest86, one of the most common memory testing standards in the industry, in AMI BIOS. Memory errors detected by MemTest86 in iMS-enabled systems can be directly corrected by iMS. 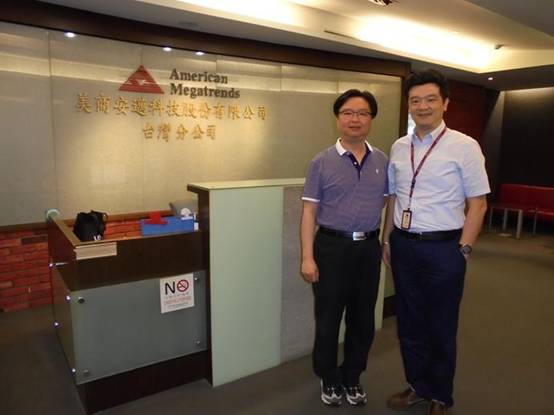