Apple has introduced a new 10.5-inch iPad Pro and a new 12.9-inch iPad Pro, featuring displays with ProMotion technology and the new A10X Fusion chip. The new 10.5-inch model reduces the borders by nearly 40% to fit into a package that weighs just one pound, according to the vendor.

Digitimes previously reported that the upstream supply chain's shipments for Apple's new 10.5-inch iPad Pro have been increasing recently and the device's monthly shipment volume is expected to grow to 600,000 units in July, up from around 500,000 units currently, helping its annual shipments to reach five million units in 2017.

The redesigned Retina display in iPad Pro features ProMotion, a new technology that delivers refresh rates of up to 120Hz. With ProMotion, Apple Pencil is more responsive with a 20-millisecond latency, according to Apple. ProMotion also improves display quality and reduces power consumption by automatically adjusting the display refresh rate to match the movement of the content.

The new 64-bit A10X Fusion chip provides performance that is faster than most notebooks shipping today, according to Apple. A six-core CPU and 12-core GPU deliver up to 30% faster CPU performance and 40% faster graphics performance than the A9X chip, while delivering all-day battery life.

The iPad Pro also features the same front- and back-facing cameras as iPhone 7, including a 12-megapixel camera with optical image stabilization, along with a 7-megapixel FaceTime HD camera. The iPad Pro also features a four-speaker audio system, providing powerful, clear and rich stereo sound in any orientation. An embedded Apple SIM and support for 802.11ac Wi-Fi and LTE Advanced make it easier to stay connected.

The Apple Pencil and Smart Keyboard, available for purchase separately, bring precision and utility to the iPad Pro. Sensors in the Apple Pencil measure both pressure and tilt for natural drawing, annotating and note-taking. A new full-sized Smart Keyboard has been custom designed for the 10.5-inch iPad Pro, offering a keyboard that never needs to be charged or paired over Bluetooth and is foldable into a protective Smart Cover.

The new iPad Pro models are already available to order in markets including Australia, Canada, China, France, Germany, Hong Kong, Italy, Japan, Netherlands, Russia, Spain, Sweden, Switzerland and the UK. India, Turkey, UAE and other countries and regions will follow later this month. Brazil, Mexico, South Korea and other countries and territories will follow in July. 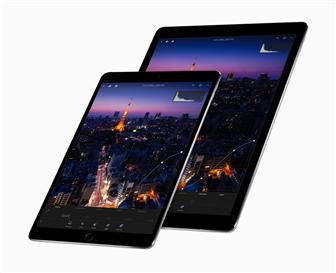