The long rumored Apple Watch (previously widely reported on as the iWatch) has been announced, but while the company believes it has created a pioneering user interface for the emerging smartwatch segment, the design of the watch with its much lauded Digital Crown assumes that the watch is worn on the users left arm, leaving the 10% of the world's left-handed population who traditionally wear watches on their right, or anyone with a physically need that precludes them from wearing the Apple Watch on their left wrist at a disadvantage.

The main highlight of the Apple Watch is the Digital Crown which Apple says is its most revolutionary navigation tool since the iPod Click Wheel and iPhone Multi-Touch. The Digital Crown provides the means to scroll, zoom and navigate information on the watch without obstructing the display. But this claim only holds true if the watch is worn on the left wrist, since the position of the crown is on the top-right of the watch.

Apple typically has a good track record for designing its products to be accessible to a wide range of users. OS X comes with numerous accessibly features and support for alternative input and output devices. Likewise iOS provides customizable gestures, one-handed navigation support, as well as features that enable iPhones and iPads to be used by hard of hearing and sight impaired users.

Apple has designed a left-hand mode that flips the Apple Watch's interface to allow it to be worn upside-down on the right arm, but this still changes the position of the Digital Crown from the top the bottom. Alternatively, right-wrist-watch wearers could adapt to wearing the Apple Watch on their left-wrist. Either way it seems that many prospective Apple Watch buyers will have to "Think Different", or wait and hope that the second-generation watches have a more universal design. 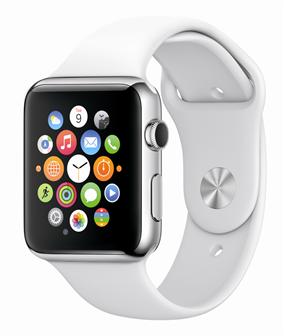