In addition to the previously revealed Iconia Tab A500 tablet PC, Acer, at Mobile World Congress (MWC) 2011, announced several new products under its Iconia lines including tablet PCs, a dual-screen notebook and smartphones.

The Iconia Tab W500 is also equipped with a 10.1-inch multi-touch screen that is complemented by a full-size chiclet docking keyboard as well as Dolby optimized audio for both productivity and entertainment.

With the Iconia Tab A100's 1024 by 600 resolution and gyrometer control, the device is suitable for entertainment functions such as watching videos, reading books or magazines and playing games.

The Iconia Tab A100 has a 5-megapixel auto-focus rear camera as well as a 2-megapixel front-facing camera for picture taking or live chat purposes. In addition, the device will also be capable of supporting wireless connections such as Wi-Fi, 3G or Bluetooth 2.1.

Acer also unveiled a new concept device, the Iconia that combines the versatility of a conventional 14-inch form factor with a unique dual-screen layout and all-point multi-touch functionality.

The Iconia is powered by Intel's Core i5 processor combining with dual 14-inch displays that support a resolution up to 1366 by 768. Protected by durable Gorilla Glass, the displays are both scratch and finger print-proof.

The device will also feature a virtual keyboard on the bottom display for output. It comes with a full-size QWERTY layout with international language support to give users the same experience of a traditional physical keyboard and features predictive text input for natural-speed typing while avoiding mistakes.

The virtual keyboard also includes a touchpad and a numeric keypad and can be easily switched to handwriting mode. 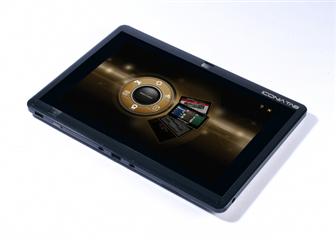 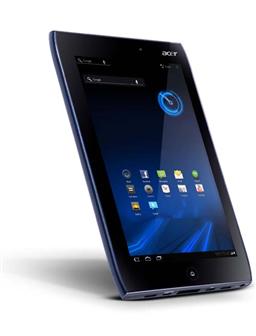 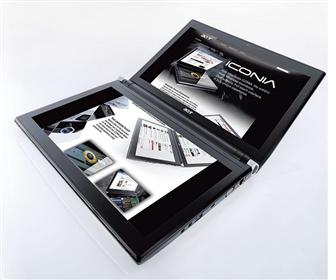