Asustek Computer has showcased several notebooks at CES 2008, including the G70 with dual GPUs, M50 and M70 with terabyte capacity hard drives and U2E with a SSD (solid state drive), according to the company.

The U2E notebook features a 32GB SSD which allows the notebook to be shock resistant and reliable. The notebook only has size of 11-inch and weight of 2lb and is eco-friendly thanks to its SSD and LED back-lit panel, claimed Asustek. 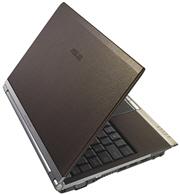