GeCube has launched an ATI Radeon X1950XTX series graphics card which includes 256MB GDDR3 memory and GeCube's X-Turbo fan with built-in Thermo Electric Chip (TEC), and temperature-controlled devices. The core clock speed of the card not only directly challenges that of X1950XTX level (648MHz) models, its overclocking speed can also reach at least 675 MHz or higher, according to GeCube. Overclocking can be done with ATI's built-in Overdrive control panel, GeCube adds. Even when overclocked, the card is able to maintain temperatures between 70 to 80-degrees C, lower than the normal operating temperature of other vendors cards without overclocking, claims GeCube. Moreover, the temperature monitor allows gamers to overclock at their own will without worrying about overheating and damaging the GPU, the company notes. 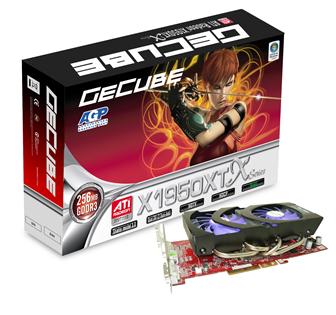