As Skype has become increasingly popular as the software of choice for online communications, more manufacturers are developing Skype-related PC peripherals including headset microphones and USB headphones with a built-in Skype API (Application Program Interface). Jazz Hipster, which specializes in digital audio speakers, recently introduced its Bzcom J1302 desktop microphone with built-in speakers, a solution for use with Skype for online communications, such as chat rooms, online meetings, voice-over IP (VoIP), online radio and karaoke. The product will begin shipping in May.

Jazz Hipster combines the functions of microphone and PC-use USB speakers into the Bzcom J1302, enabling users to just turn on the speaker and chat when using Skype, rather than needing to don headgear and microphone and talk like an operator. Jazz did not introduce any new integrated technologies into the J1302, but instead focused on design and functionality.

With dimensions of 10x17x12cm (wxhxd), the Bzcom J1302 is a compact unit that features one microphone (built into the base), two 1.75-inch full-range speakers (located on each side of the device), one USB connector and one headphone jack. Jazz also provides a user guide and a utility CD. There is no power adapter for the Bzcom J1302, as it is powered through USB. The USB cable also serves at the audio connector to the PC.

Overall, the microphone quality is clear enough so that the product can be shared among several users, and the Bzcom J1302 can be used by small businesses looking to use the free Skype service as an inexpensive audio-conferencing solution.

However, even with the simulation software provided on the utility CD, the unit can only reach a certain degree for 3D sound effects. Users requiring high performance sound quality may be disappointed by the weak sound that the Bzcom J1302 provides. We suggest plugging PC speakers into the headphone slot for better sound quality. 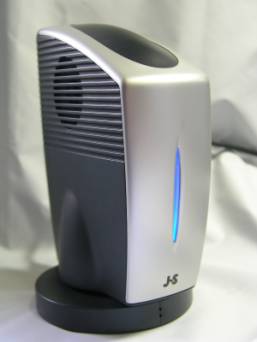 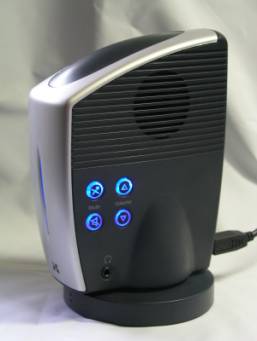 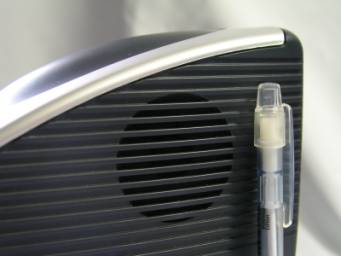 The Bzcom J1302 has an avant-garde design, looking perhaps like a spaceship bow from a science-fiction movie. The front of the unit has a status light that shines with an aesthetic blue light when the unit is being operated. In addition to the two speakers, four function keys are located on the side of the device: two for controlling volume (up/down), one microphone mute (on/off) and one speaker mute (on/off). The function keys are also lit with a blue hue when the system is being operated.

Although the function keys have a rubber feel, they are still a bit stiff and pressing the buttons is not as easy as most users would expect. It would be better if this matter were altered. 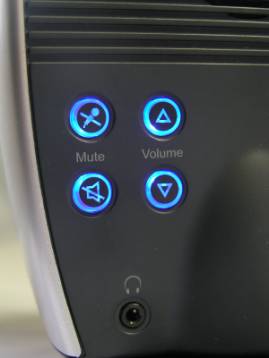 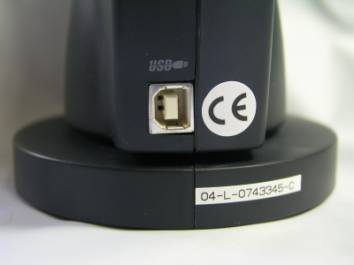 USB slot on the back of the device

The key to the Bzcom J1302 is the microphone, and it is very sensitive. You can even hear the fluctuating electric current while the systems is being operated. By using the microphone mute button, Jazz also provides users with a convenient an on/off switch for the device, a thoughtful design for users who do not wish to access software to start and stop conversations. 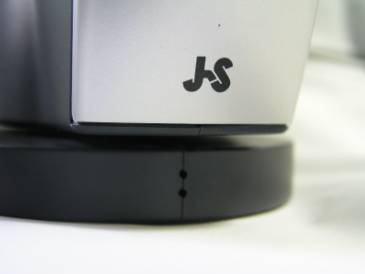 Although the microphone is hidden inside the base of the unit, recording sound is still clear. 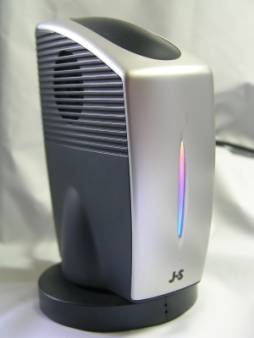 When the microphone is turned off, the top of status light turns from blue to pink.

When you connect the Bzcom J1302 to any Windows XP computer, you can just plug it in without needing any driver installation. In addition, the CD features sound effect utilities, including Software 7.1 Virtual effects and X-ear 3D technology. The utilities help the device deliver better 3D sound by mimicking effects when users listen to music. However, despite the maker considering these feature very carefully, it is not easy for a normal user to notice the improvement.

In addition, the Bzcom J1302 can connect with Mac computers with the OS9 or later versions. 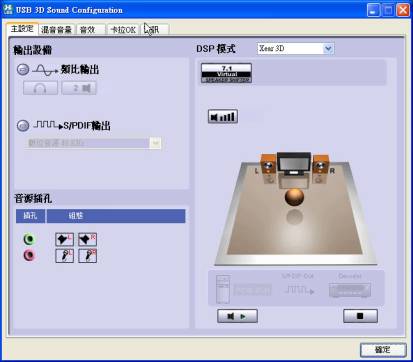 The sound performance of the Bzcom J1302 cannot compete other computer speakers that cost NT$300-500 (US$9.50-16), because it lacks high- and low-pitched rhythm. The design is much more suited for use of online conversations through Skype.

With its lower price, the Bzcom J1302 desktop microphone can compete with other voice conferencing systems for commercial applications. Users who have used the device as a voice conferencing platform have commented on the depth of sound, which provides a better acoustic ambiance than that of all users speaking directly into a microphone. The device seems especially suited for getting a group of people together to have an argument over Skype, as the microphone will prevent the combined noise level from getting out of hand.

However, comparing the audio output of the Bzcom J1302 to other headsets is difficult, due to the small 1.75 inch in speakers. Even low-priced earphones can manage higher sound quality than the device. However, the audio from the J1302 is good enough for conversations during an online meeting.

One last point, because the Bzcom J1302 microphone is so adept at picking up every sound, it may be a bit overkill for one person to use and is better suited for group conversations.