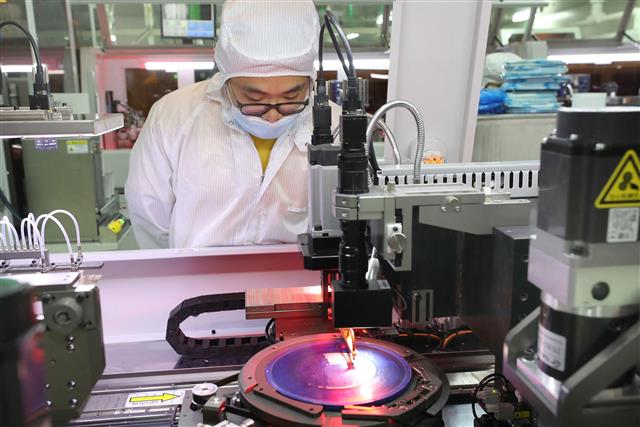 Taiwan's first-tier IC design houses Novatek Microelectronics and Realtek Semiconductor are seeking more capacity support from foundry partners TSMC and UMC to fulfill new orders from new clients that are bolstering their growth despite a decline in demand for consumer chips, according to industry sources.

The sources said second- or third-tier IC designers are suffering sluggish sales momentum for consumer electronics devices such as handsets, TVs and general PCs, and low visibility of orders from clients is not only heaping downward pressure on their quotes and gross margins, but also forcing them to reduce required foundry capacity.

But this is not the case with Novatek and Realtek, neither of whom are facing order cuts by clients. Novatek continues to boost the production and shipment ratios for IC products with high gross margins, including both medium- and small-size handset and notebook AMOLED DDIs and specialty ASIC TDDIs, as well as SoCs for 4K/8K TVs and gaming applications.

This, coupled with its deployments in automotive chips paying off and its chip shipments for iPad and MacBook series ramping up quarter by quarter this year, has significantly offset the weakening shipments for other consumer applications, the sources said.

Realtek's IC shipments for PC applications, accounting for over 30% of its revenues, have been affected by lackluster demand, but capacity vacated from the segment has been soon filled by other segments, particularly automotive and networking chips, driving the company to pursue more capacity support from TSMC and UMC, the sources said.

Realtek is expected to sustain growth momentum in its shipments of car-use Ethernet controllers, switch controllers and other networking chips throughout 2022, as it has landed related orders from major automakers including Tesla, Hyundai, Mercedez Benz, BMW, Honda and Toyota, the sources said, adding Realtek is estimated to double its sales of automotive Ethernet controllers in 2022 from 2021, with the prospect that it may gradually replace Marvell as the world's top vendor in this chip segment by 2023.

Realtek has had its Ethernet controllers paired with Aspeed Technology's remote baseboard management controllers for shipments to clients, relying on production at TSMC, the sources said. Also among UMC's top-6 clients, Realtek has also booked new capacity of the foundry's fab P6 at Southern Taiwan Science Park, the sources added.