ASI adopts VIA processors for energy efficient PCs in Mexico

VIA Technologies and ASI have announced that the new Alaska Wolf PC powered by the VIA C7-D processor is available at Wal-Mart stores throughout Mexico.

Based on the VIA pc2500 motherboard, the Alaska Wolf PC combines low power consumption with productivity and multimedia application performance to provide an affordable energy efficient system for Mexican consumers and business users at a price of $5,299.99 Mexican Pesos (US$485), noted the companies.

The Alaska Wolf PC is powered by a combination of the 1.5GHz VIA C7-D processor and VIA CN700 digital media chipset featuring the VIA UniChrome Pro 2 IGP (integrated graphics processor). It also features 1GB DDR2 DRAM, a 160GB SATA HDD, a DVD Combo Drive and a 17-inch LCD monitor, noted the companies.

Source: ASI and VIA, compiled by Digitimes, August 2007 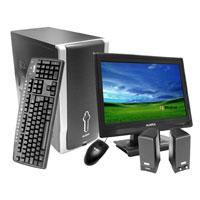