AMD has launched its EPYC 7000 series high-performance datacenter processors. AMD was joined by multiple customers and partners at the global launch event on June 20 in presenting an array of systems, product demonstrations, and customer testimonials. The EPYC comes with up to 32 high-performance Zen cores and an exclusive feature set.

The Radeon Instinct MI25 features AMD's new Vega architecture using a 14nm FinFET process and is suitable for large-scale machine intelligence and deep learning applications. The MI18 uses the high-performance, low-power Fiji GPU architecture and is designed for machine learning calculation and all sorts of HPC applications, AMD said. The MI6 is based on Polaris architecture and is also created for HPC, machine learning and Edge intelligence applications. AMD will start supplying the Radeon Instinct products to partners in the third quarter of 2017.

The EPYC processors feature scalable system on chip (SoC) design ranging from 8-core to 32-core, supporting two high-performance threads per core. They also feature memory bandwidth configuration with eight channels of memory on every EPYC device. In a two-socket server, there is support for up to 32 DIMMS of DDR4 on 16 memory channels, delivering up to 4TB of total memory capacity.

AMD CEO Lisa Su revealed at the event that following the releases of these 14nm Zen-based Naples series EPYC processors, the company is set to release its 7nm Zen 2-based Rome series processors between 2017-2020 to succeed the Naples series. In 2020, AMD will then announce the next-generation 7nm Zen 3-based Milan series.

AMD may switch the manufacturing partner for its 7nm processors from GlobalFoundries to Taiwan Semiconductor Manufacturing Company (TSMC), which would improve yield rates and costs, according to industry sources. 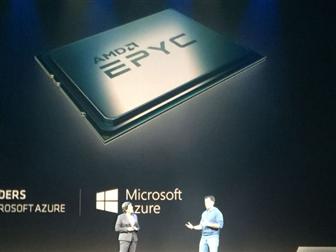