Thermaltake Technology officially introduced its iFlash+ (12cm) fan. The fan has a dimension of 120×120mm and spins at 1800RPM with a noise level rated only at 25dBA. Despite its near-silent operation, the fan features a high-volume airflow, according to the company.

Unlike standard traditional fans, the iFlash+ (12cm) utilizes a streamline cover on top of the fan. When the fan is operating, the fan blades will be able to display the word "Thermaltake" and the current operating temperature. The fan will attract anyone that sees the computer system under its blue background glow, said Thermaltake.

Thermaltake Technology's iFlash+ (12cm) has a life expectancy of 30,000 hours, demonstrating the effort that Thermaltake puts into providing the highest-quality product users will be able to use on the market today, according to the company. 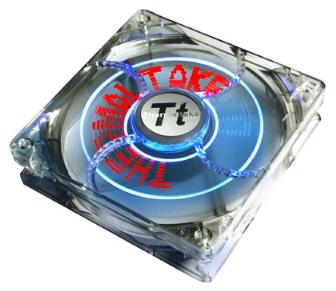