The 140mm fan helps reduce the high noise level that is typically associated with high-wattage power supply. The greater wing span of the fan blades results in a greater surface area which allows the fan to spin much slower while still pushing large amounts of cool air to dissipate heat. The Purepower RX series with 140mm fan will be available with Cable Management option in 450W, 500W, 550W, 600W as well as with standard cable output in 400W, 450W and 500W, according to the company.

To support all of today's PC requirements, the Purepower RX series power supplies complies with the latest Intel ATX12V V2.2 specification along with Active PFC (power factor correction) technology to ensure system stability and reliability. Over voltage protection (OVP), over current protection (OCP), short circuit protection (SCP) and no load operation protection are all standard safety protection features found on each and every one of Thermaltake power supplies.

The Purepower RX series power supplies comes standard with four SATA connectors to power the latest hard drives, a maximum of seven Molex connectors for optical drives or fans and a maximum of two PCIe connectors for powering multiple GFX cards setup from ATI or Nvidia. Multiple dedicated 12V rails found on Purepower RX series power supplies not only allows for higher wattage but also guarantees the CPU and GFX card(s) can operate at their optimal setting for ultimate gaming performance, according to Thermaltake. 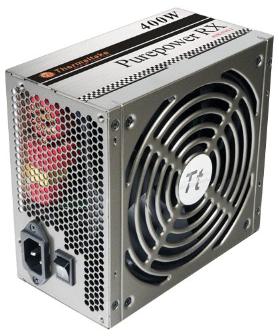