The T.photo 710 has 1GB of internal memory and features a 7-inch TFT flat-panel display that can display at a 480×234 resolution. With a thickness of 28mm, the digital photo frame has a rotation function, which allows the display of either landscape photos or vertical portraits.

The T.photo 710 supports digital camera JPG, BMP and motion JPG formats, and allows photos to be viewed one at a time, in slideshow view, or tiled thumbnail view – all with background audio from its built-in speakers. The digital photo frame has a headphone jack allowing it to be used as an MP3 player, according to Transcend.

The T.photo features a multi-card reader that can read SD cards (SDHC/SD), MMC cards, MS cards, and CF cards. A USB host connector on the digital photo frame allows USB flash drives to be plugged and once connected, the T.photo will automatically find and display all pictures and music available on the flash drive, according to the company.

The digital photo frame's clock and calendar modes display a photo or slideshow of the user's choice on one half of the screen, while showing digital clock and monthly calendar on the other half.

The functions of the T.photo 710 can be controlled with a remote control.

The T.photo 710 will have a suggested pre-tax retail price of US$119, according to the company. 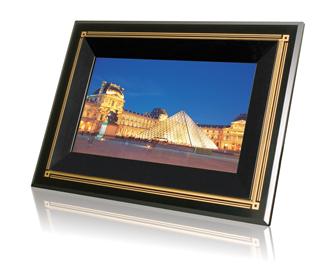