Japan announced that it would demonstrate its autonomous vehicle technology during the Tokyo Olympics as a demonstration of intelligent automobiles. Driven by 5G and artificial intelligence (AI), the ICT industry is heading towards an era of autonomous vehicles. The applications of ICT technologies in cars have been gradually shifted from entertainment videos, audio playbacks and navigation systems in early days to developing deep learning and vehicle-to-everything (V2X) communication in order to eventually make autonomous vehicles a commerical reality. To achieve this goal, semiconductor will undoubtedly be the primary driving force for any ICT technology.

Advanced driver assistance system (ADAS) is the most popular application in the current automotive environment. It is composed of many functions such as Adaptive Cruise Control (ACC), Autonomous Emergency Braking (AEB), Blind Spot Detection (BSD) and Driver Monitoring System (DMS). Car vendors have been trying to work on more active safety protection and expect to reach the ultimate goal of self-driving cars. As such, more semiconductor manufacturers are cooperating with car OEM to boost device reliability.

As mentioned above, currently there have been many actual semiconductors applications for automobiles, including the power semiconductors and video and audio playback and integration systems used in electric vehicles (including hybrid electric vehicles), micro-controllers/digital signal processor/semiconductor sensors used for vehicle and passive safety, and many other types of memories (such as NOR and DRAM). According to the statistics of IHS, the total output value of automotive semiconductor industry has grown at an average annual rate of about 7% in the past few years.

In most systems in automobile, DRAM is responsible for storage of program codes and computing data, and it plays a more important role during the development of automobiles with more and more ICT functions, which include but are not limited to personal computers (PCs), servers, mobile devices and vehicles. So far, the primary memory-based automotive applications are information & entertainment system and ADAS, and they account for more than 80% of the entire output value of automotive DRAM industry.

Among all ADAS applications nowadays, DRAM is mainly used for applications related to radar/lidar sensing and camera sensing in which large-size data of the environment has to be stored or processed by the domain controller in time. Therefore high bandwidth and high computing performance is required for controller and DRAM, and it will increase along with enhanced sensor resolution. To meet this requirement, LPDDR4/4x DRAM has become more and more popular in such applications because it supports data transfer rate up to 4266Mbps. In terms of information & entertainment applications, the major systems are instrument cluster, infotainment and telematics. DRAM is used in instrument cluster and infotainment systems for graphic function and is used in telematics system for data transmit function. The early development led to the long-term use of DDR (DDR2/DDR3) series. However, due to the power saving requirement of automobile, low power memory (LPDDR) has been gradually take the place of DDR, and LPDDR4/4x is becoming mainstream.

It is interesting to see that, in addition to DRAM capacity, the performance is also a critical factor among these applications. Due to the large variety of automotive applications, not all of them require large capacity DRAM. More frequently seen applications actually require computation performance. For example, various automotive sensing technologies will rely on high speed computation to generate real-time results to be immediately used by on-board electronics devices. As a result, small-capacity LPDDR4x DRAM will play important roles in those applications.

The importance of reliability

Comparing to consumer product, a major difference of automotive product is that not only the quality state of on-board electronics device upon factory delivery is concerned, but also whether it could operate normally for a long time. Cars are often driven in all kinds of weather and environment, so automotive semiconductor must withstand high and low temperatures in order to operate normally for many years. During driving, any mistake could result in extreme danger. That's why reliability of automotive semiconductor is so important. After all, the rebooting can solve most problems for consumer electronics products, yet for a moving vehicle this is not a feasible solution.

Common hardware reliability issues of automotive semiconductor are errors in die and packaging. The possible errors in die include transistor instability, ion contamination, electromigration (EM) of metal conductor, and Electrostatic Discharge (ESD) while the reliability errors relating to packaging include warpage of packaging.

In order to solve the aforementioned hardware reliability issues, the "High Temperature Operating Lifetime Test" (HTOL) will be conducted before product mass production to simulate the product operation status during high temperature acceleration. The "Burn In" process in the mass production line can be used for testing "Early Failure Rate" (EFR) of defective process component. As for the packaging, the warpage deformation can be solved via Board Level Reliability.

Winbond has years of experience in fabrication of automotive memory

Winbond owns self-built wafer fabs, and is one of the top four IC makers that can simultaneously provide DRAM and NOR/NAND FLASH. The production lines of automotive DRAM include SDRAM, DDR/2/3 and LPDDR/2/4/4x with capacity ranging from 16Mb to 8Gb. It can meet customers' strict requirements of management of automotive memories, and provide longevity services. The capacity of Winbond LPDDR4/4x DRAM series is 1~8 Gb with 25nm technology node which is self-developed by Winbond, and the speed could be up to 4266Mbps. In addition to the supply type of known good die, Winbond also provides the standard 200BGA package with various kinds of automotive grade whereas AG1 grade will be ready at 3Q'20.

With the products certified by IATF 16949 and AECQ-100 standards, Winbond has been a supplier of many automotive electronics devices manufacturers for many years. In the future, as more ADAS functions enter the car and gradually realize the self-driving cars, Winbond will continue to provide products with good performance and reliability to support customers in automotive industry. 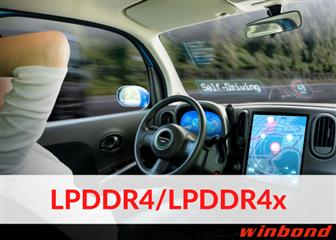