The changes in these in-vehicle systems will spur considerable growth of automotive data, and the required memory capacity, data transfer rate, reliability level and safety features must make advances as well. IC Insights reported that consumer demand for safer driving systems and government mandates are expected to raise the automotive IC market by 22% to a market value of US$28 billion in 2018. Rising DRAM and memory prices will further boost growth of the automotive IC market, with product costs expected to increase 22.4% in 2018.

Reliability is a top concern for automotive electronics components

However, the automotive memory market has started to show some changes since 2017. In the present automotive market, ADAS and instrument cluster applications have been driving fast growth in demand for automotive memory, and new requirements have also been constantly emerging. There are particularly immense needs for features such as high density and instant boot.

For example, automakers generally require electronics systems be able to load the operating system, transmit data and boot up into normal operation within one second. If some of the tasks, such as data transmission, can be optimized, the system will be able to boot up faster.

In view of this, William Chen, deputy director, flash product marketing center, Winbond, thinks NOR flash is suitable for applications with a small memory footprint. However, for use scenarios where a large amount of data needs to be sent to DRAM instantly, such as automotive applications, and where error-correcting code (ECC) is required, automotive grade NAND flash solutions are a new trend.

Automotive applications such as instrument cluster and center information display (CID) will growingly require memory solutions with high density, large capacity and instant data transfer in line with booming developments in the automotive market. Automotive memory needs have grown from NOR flash with densities ranging from 64Mb to 512Mb that were able to support most cars in the past, to 1-2Gbit today and the costs will increase accordingly as well, commented William.

In response, automakers can use embedded multimedia card (eMMC) as an alternative but it is more suitable for high-end instrument clusters. To meet the memory needs by entry-level and mid-range automotive applications, Winbond has introduced a High Performance Serial NAND product family ranging in density from 1Gb to 2Gb with a 4Gb product on the roadmap.

As a matter of fact, 70% of Serial NAND used to be integrated in network communication equipment (ADSL, XDSL and G-PON) and 30% was used in industrial (safety and protection) applications. With respect to memory use in automotive platforms, manufacturers placed more emphasis on NOR flash in the past but have begun to make some changes. Starting from 2017, many tier-1 automotive system vendors have been evaluating the adoption of Serial NAND, according to Winbond.

"This is because the new High Performance Serial NAND enables a data transfer rate four times faster than Parallel NAND and other Serial NAND currently on the market," said Wilson Huang, manager, electronics product marketing division I, Winbond. In terms of hardware specifications, the company's solution is housed in the same package as conventional NOR flash on the market, so compatibility will not be an issue.

According to William, SoCs are streaming data on the data bus of the next-generation ADAS and instrument cluster at a maximum of about 200 MB/s. Winbond's solution through dual-quad I/O interface can support 80% of the data flow.

As more cars become connected, the demand for data storage is expected to reach 1TB by 2020. Many world-leading memory suppliers have been expanding into the automotive industry. Winbond's High Performance Serial NAND, leveraging its Continuous Read technology and lower packaging cost, will be able to meet the automotive industry's stringent requirements for high performance, high reliability and low cost components. 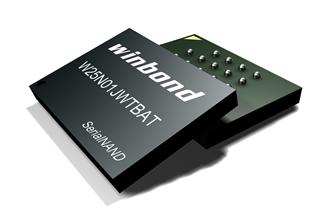