VIA Technologies has announced a dual-core version of the low power VIA VB8004 Mini-ITX board. Coupling the 1.6GHz VIA Nano X2 E-series processor with the VIA VX900 media system processor, the VIA VB8004 provides a high performance and highly scalable solution for advanced digital signage and gaming systems.

In addition to providing native support for dual-displays, the VIA VB8004 Mini-ITX motherboard can also be easily upgraded to support four displays using an additional VIA S3 5400E graphics module, providing developers the widest possible variety of multi-display configurations, including HDMI, LVDS, and DVI technologies.

Powered by a choice of a 1.6GHz VIA Nano X2 E-Series, or 1.6GHz and 1.2GHz VIA Nano processors, the VIA VB8004 leverages the advanced multimedia capabilities of the VIA VX900 system media processor to deliver DirectX10.1 graphics and support for rich 1080p video resolutions.

In addition to supporting up to 4GB DDR3 memory, the board features rich I/O capabilities including an HDMI port, one DVI port, a one channel 24-bit LVDS, one GigaLAN port, and six USB 2.0 ports.

The VIA S3 5400E dedicated graphics module is a daughter card specially designed to provide advanced multimedia capabilities for next-generation embedded applications and is the most energy efficient DirectX 10.1 GPU on the market today, the company claimed. With support of DirectX10.1, Shader Model 4.1, OpenGL 3.1, and OpenCL 1.0, the 5400E GPU provides a cost-effective solution for feature-rich graphics processing with high levels of video decoding and 3D rendering performance.

On-board I/O includes one HDMI port and one DVI port. 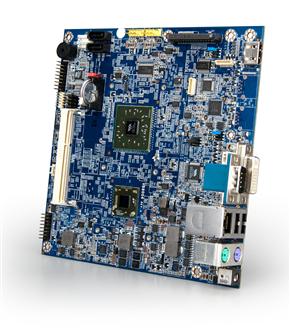 Tags
IT + CE IT components, peripherals Mobo, chipset Mobos motherboard VIA
Companies
VIA Technologies
Latest Digitimes news
Around the web