Global large-size TFT-LCD panel shipments (9-inch and above, including tablet PC applications) are expected to reach 177 million units in the second quarter of 2011, up 10.2% sequentially, according to predictions based on data gathered by Digitimes Research.

The shipment growth is being driven mainly by demand for TV and tablet PC applications.

Taiwan makers will have an about 40% share of the global market by shipping 71.28 million large-size TFT-LCD panels, up 9.4% sequentially.

Growth of notebook panel shipments is slowing down, but AUO and CMI will both see shipments to the table PC segment grow over 200% in the second quarter. 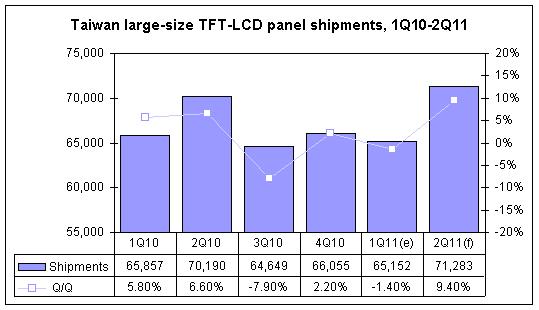