The MSI R5670-PMD1G will also adopt military-class components, such as Hi-c cap and tantalum capacitors to ensure stability during overclocking, the company said. The all solid capacitor and all solid-state choke design can extend the lifespan of the graphics card and avoid high frequency noise generating from choke vibrations under high loading, MSI claimed. 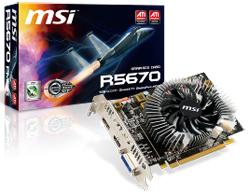