The Trinergy is also equipped with an external OC Dashboard that allows overclocking with a press of a button.

Before the end of 2009, MSI will also launch the Big Bang Fuzion motherboard featuring Lucid's Hydra engine, which is designed to support connections between AMD and Nvidia GPUs in a single system. 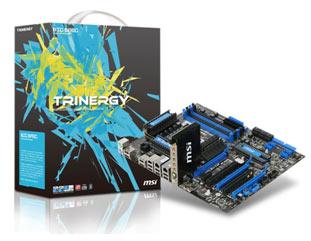