Mio Technology has announced its Mio Moov product family – four new personal navigation devices (PNDs) that combine Mio's hardware expertise with a fresh user interface. This is the first set of Mio Technology products to incorporate software developed internally, using design and content proficiencies from the recently-acquired Navman. The Mio Moov 200, 210, 300 and 310 emphasize straightforward navigation and provide excellent value that makes quality GPS attainable for many consumers, according to the company.

The Mio Moov 300 and 310 both feature a 4.3-inch widescreen display which allows for more on-screen information while the Moov 200 and 210 sport a 3.5-inch, square-shaped display with a bright, anti-glare screen.

The devices incorporate text-to-speech functionality to call out actual street names when making turns, helping drivers keep their eyes on the road. These features are paired with a redesigned user interface and more than 3.5 million points of interest.

Mio Moov 310 and 210 also come with a one-year paid Traffic Messaging Channel (TMC) subscription. Powered by ClearChannel's network of affiliates, TMC provides real-time updates on accidents, detours and construction that could delay or prevent drivers from reaching their destination. TMC updates are automatically displayed by the Moov 310, along with suggestions for routes around the obstruction.

The Mio Moov product line features new SiRFInstantFixII GPS receivers, which deliver faster GPS signal locks so users can begin navigating as soon as they are ready to drive. SiRFInstantFixII can find and lock a GPS signal in as few as five seconds during typical device start-ups, almost half a minute faster than other GPS devices. For users in cities where tall buildings can impede GPS signals – creating "urban canyons" – a fast signal requisition can be the difference between missing a turn and arriving on-time. 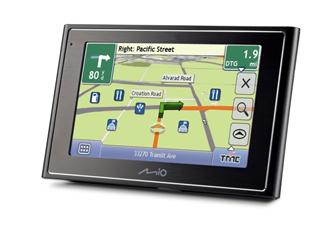