Hewlett-Packard (HP) will showcase a white-colored 15.4-inch notebook at the upcoming 2007 Taipei Computer Applications Show from August 2-6, according to sources at HP Taiwan. 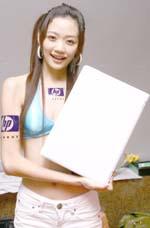