Nvidia has announced a new class of processors based on a new graphics processing unit (GPU). Under the Nvidia Tesla brand, Nvidia will offer a family products that will place the power previously available only from supercomputers in the hands of every scientist and engineer. Today's workstations will be transformed into personal supercomputers, claimed the company.

Computing on Nvidia Tesla is now available to any software developer through the world's only C-language development environment for the GPU. Nvidia Cuda is a complete software development solution that includes a C-compiler for the GPU, debugger/profiler, dedicated driver, and standard libraries. Cuda simplifies parallel computing on the GPU by using the standard C language to create programs that process large quantities of data in parallel. Programs written with Cuda and run on Tesla are able to process thousands of threads simultaneously, providing high computational throughput to enable the GPU to quickly solve complex, computational problems. The Nvidia Cuda development environment is currently supported on the Linux and Microsoft Windows XP operating systems, noted the company. 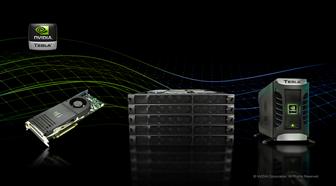