The new G33T-M2 supports Intel Core 2 Duo processors with up to 1333MHz FSB, Core 2 Quad processors up to 1066MHz FSB, and dual-channel DDR2 memory up to 8GB via four DIMMs.

Most motherboards are designed as standard to incorporate four USB 2.0 ports, however, ECS has recognized that performance users and gamers sometimes require even more connectivity for the many add-ons available on the market. To meet these needs and ultimately eliminate the need for an additional USB2.0 expansion hub, the new P35T-A features six USB 2.0 ports on the rear I/O panel. It also features an eSATA port which has a higher transfer rate than conventional USB 2.0 for external HDDs. Other connections include, one PCI Express x1 slot, three PCI slots, two PS2, one Serial, and one RJ45 LAN.

ECS new motherboards based on Intel 3 series chipsets have improved performance and efficiency, according to ECS. It is the only chipset with support for the upcoming Intel 45nm processors which ensures that users are future proofed for prospective technology upgrades, highlighted ECS. These chipsets feature a 1333MHz FSB to work seamlessly with Intel's new ICH9 southbridge I/O chip. 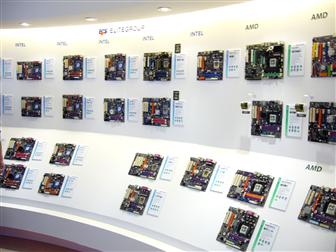 A selection of the motherboards ECS is displaying at Computex Taipei 2007
Photo: Ricky Morris, Digitimes, June 2007