Supply chain
The SiS671FX chipset to be implemented in NEC desktop PC
Press release, May 31; Joseph Tsai, DIGITIMES
Thursday 31 May 2007

SiS has announced that its Windows Vista ready chipset, SiS671FX, has been adopted by NEC Computers Asia Pacific for the company's latest desktop PC L1030.

Using the SiS671FX chipset as the core of the system, the NEC L1030 desktop PC supports Intel Core 2 Duo CPUs up to 1066MHz FSB, and DDR2 667/533 memory up to 4GB. The built-in SiS Mirage 3 graphics engine enables the NEC L1030 to fully release the potential of Windows Vista, and deliver excellent animation or gaming performance, said SiS. In addition, the SiS671FX equips a PCI Express x16 slot for an extra add-on high-end graphics card. 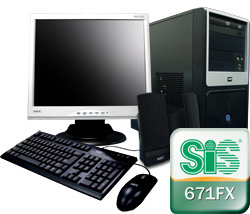