Sony on May 8 debuted the NW-A800 and NW-E010 series of Walkman digital music players for immediate launch in the Taiwan market. The players deliver excellent audio quality for market segmentation, according to Taiwan marketing president Hiroyuki Oda under Sony Taiwan.

The two series were launched in the Japan market in March 2007, Oda noted. 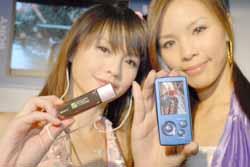