Asustek Computer has announced the EN8600GTS graphics card based on the Nvidia GeForce 8600GTS GPU. Aimed a gamers, the EN8600GTS is equipped with 256MB of DDR3 memory and is able to support SLI technology.

The EN8600GTS is also fully HDCP compliant – allowing users to playback of HD DVD, Blu-Ray Discs and other protected content at full HD resolutions. Furthermore, the ASUS EN8600GTS comes with a a range of input and output solutions to fit any situation. Utilizing the PCI Express slot, the card supports TV-Out, HDTV-Out, Dual DVI-I and VGA outputs.

The EN8600GTS is available bundled with the recently released Stalker, as well exclusive Asus applications such as Asus Gamer OSD, a utility which enables overclocking and chat options during gameplay. 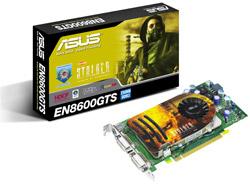