For the past few years, TSMC has consistently allocated around 8% of its revenue toward R&D. At the first glance, 8% may not seem like a large sum. However, TSMC generates a foundry service revenue that is three to four times what Samsung makes and six to eight times what UMC makes. Even if Samsung and UMC invested the same percentage of their revenue into R&D, there'd still be a big difference between their R&D expenditure and TSMC's. On top of that, TSMC is already way ahead in process technology. It will be difficult for those lagging behind to overtake TSMC even if they do it at all costs. Besides, TSMC vows not to meddle with customers' business and uphold the principle of neutrality above all else - a principle that is the key to its success.

TSMC founder Morris Chang has often referred to Moore's Law as a way to track progress. It is indeed what TSMC bases its process roadmap planning on. TSMC plans process node advancement in a mutually supportive "double helix" approach within a time frame of 18 to 24 months. For example, a blue team is given 18 to 24 months to focus on the 28nm node, then moving on to 16nm, 7nm and 3nm nodes. In the meantime, a red team targets the 20nm, 10nm and 5nm processes. The two teams compete against each other, support each other and create business together (see the figure). TSMC employs Taiwan's top-notch talent. The way it operates enables it to come out ahead in market competition. As long as the foundry industry stays on track, TSMC has nothing to worry about. In fact, TSMC has reaped tremendous benefits from the semiconductor super cycle in recent years and thereby built up strength that it can rely on to keep competitors at bay.

TSMC has upstream and downstream suppliers and customers contribute efforts to its R&D. As TSMC strengthens its presence in the industry ecosystem, it forms a bond with partners and customers for joint R&D, thereby cutting down costs, building up customer trust and engaging equipment and material suppliers.

As a bridge player, Morris Chang knew the rules of having an open room and a closed room. He plays by the rules and sets the rules as well. I couldn't help but admire Morris Chang for having the acumen to always make the right decision at the right time as it requires the perfect combination of timing, location and people and, more importantly, wisdom and courage to achieve total victory. 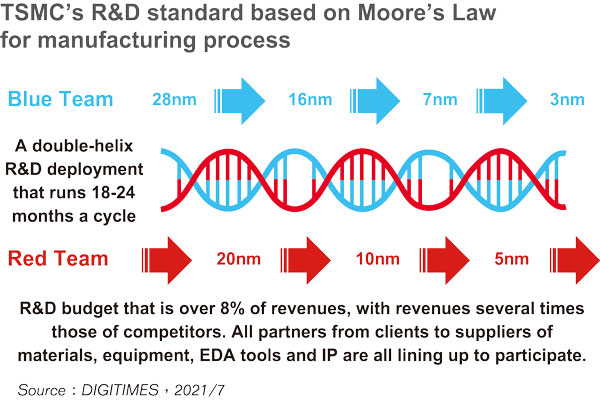 (Editor's note: This is the third part of a series of analysis by DIGITIMES Asia president Colley Hwang about TSMC's competitiveness and the foundry sector.)