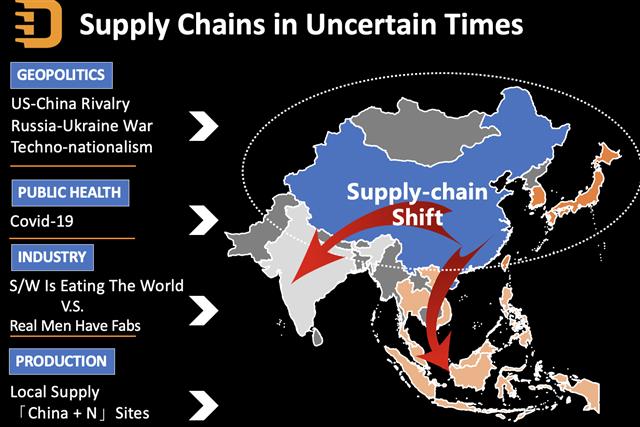 Research organizations win the trust of society and industry players with their credible research. In 1985, when I first started my career in industry research, I went to Taiwan's customs every month to check the export reports of electronic products, and the statistics I compiled became a very important reference for the industry at that time.

But there were many customs data to be reviewed, and because of customs procedures, the results could only be published in April every year. Starting 1990, we used questionnaire surveys to keep track of the top 20 manufacturers and were able to publish the annual production and sales data before the end of each year.

DIGITIMES is a research organization growing and thriving in Taiwan, so it is not possible to do the same kind of research that IDC, Gartner, IHS, and other US market research firms do on various countries' PC shipments and production volume of each car manufacturer. But we can make use of the advantages of Taiwan's industry in the supply chain and our understanding of Japan, Korea, and emerging countries to define the scope of the industry and grasp the dynamics of the supply chain in Asia.

Based on this concept, we focused on three major industries - automotive, ICT and machinery - and studied the value and profitability of more than 4,000 listed companies in 11 Asian countries to make a correct ranking and structure, and shared such important findings with the industry after analysis and discussion by experts.

Recently DIGITIMES Asia - the English platform of DIGITIMES - released the 2022 edition of the ASC100 survey report, and found that 37 companies from China were ranked among the top 100 supply chain companies in Asia. Japan has 33 companies, but the Japanese automotive industry continues to dominate the industry, with the 33 Japanese companies generating US$1.317 trillion in revenue, ahead of the 37 Chinese companies that together generated US$921 billion.

The challenge for Japan today is how to transform its huge automobile industry to embrace electric vehicles and self-driving cars. Not long ago, Japanese EVs were hardly recognized by consumers in terms of quality, and its capability of upstream-downstream, software-hardware integrations was lacking. Japan's semiconductor industry also is facing pressure from the fact that its advanced manufacturing processes have yet to go beyond the 10nm node.

Japan's setback is that it failed to grasp the opportunity during its industrial leadership around 1990, and now Japan's challenge is obvious, while China's challenge has just begun amid the trade war. The US has accused China of misdeeds in seven aspects: intellectual property violations, technology theft, exchange rate manipulation, improper subsidies, dumping, hacking attacks, and drug trafficking. And India joined the quadrilateral talks with the intention of replacing China as the world's production hub.

When we released our ASC 100 findings, we held a forum featuring Josh Fulger, managing director of Bharat FIH, India, and LitePoint president Brad Robbins. We had an insightful discussion around India in an online talk for more than an hour, highlighting the importance of India in the supply chain.