Industries and logistics support each other 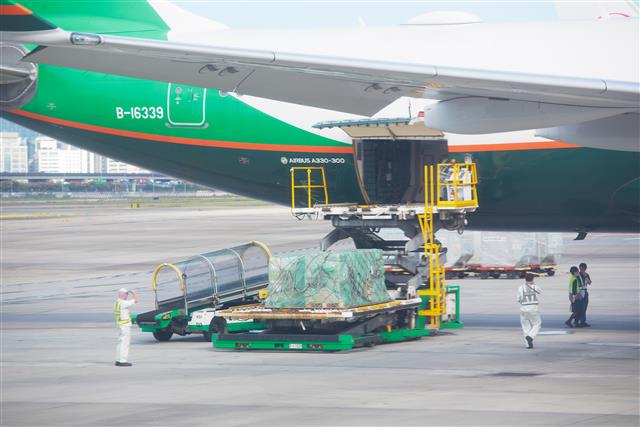 Taiwan and South Korea, both strong in high-tech industries, saw their exports increase by 29.4% and 25.8% annually respectively in 2021. Korean Airlines, China Airlines, and EVA Air led the recovery in 2021 by becoming the world's three most profitable airlines with up to 95% of cargo revenue. With the wave of globalization that began in the 1970s, East Asian countries with long experience in efficiency and high education levels have become an indispensable link in the global supply chain.

The cargo volume of Taoyuan Airport had increased from 2.27 million metric tons in 2017 to 2.79 million metric tons in 2021, with double-digit growth in exports, imports, and re-exports, and the revenue and profits of Taiwan airlines have risen in tandem with Taoyuan Airport's cargo volume data. In 2021, CAL's profit reached NT$9.3 billion, and EVA Air's was NT$6.6 billion. However, KAL's revenue is equivalent to NT$15.55 billion.

Korean Air and China Airlines have very similar fleet structures, but why is Korean Air more profitable? The key is that KAL has already merged with Asiana Airlines, and the whole South Korean market is dominated by one single airline; and secondly, Korea is close to the Arctic Circle, so it has more advantages than Taiwan in flying to the US and Europe. In the future, if the production hub is transferred to ASEAN and South Asia, then the geographical location will be a major selling point for Taiwan.

In terms of cargo, the global air cargo volume in 2021 was 19% higher than in 2020, and 7.3% higher than in 2019 before the epidemic. While demand has generally returned to pre-pandemic levels, cargo flight capacity has dropped 12.8% because of the pandemic. The more freighters an airline owns, the higher the value, but many airlines also use the bellies of passenger aircraft to carry cargo, which also contributes about 30% of capacity.

The largest increase in traffic was from Asia Pacific to North America, up 34.9%, which may be related to the US port congestion. Taiwan's purchasing managers' index (PMI) had exceeded 50 for more than 20 months and continues to show an expansion trend, even reaching 56.2% in January 2022. The global market also remains at a high level of 53%. It is believed that air cargo will remain in a tight situation in the next 1-2 years.

Among all the airlines, only Korean Air, China Airlines and EVA Air are singing a song of triumph, which is certainly related to the export of high-tech and semi-conductor products and the import of cutting-edge technological equipment.

Colley Hwang, president of DIGITIMES Asia, is a tech industry analyst with more than three decades of experience under his belt. He has written several books about the trends and developments of the tech industry, including Asian Edge: On the Frontline of the ICT World published in 2019, and Disconnected ICT Supply Chain: New Power Plays Unfolding published in 2020.
Tags
commentary editorial logistics President of DIGITIMES President of DIGITIMES Asia
Share this article
Other links
Print
Related content
Related stories
Companies should consider value chains for globalization, says former Sharp CEO
Dynamic supply chain management is the new normal
Taiwan manufacturing sector may come under larger pressure in 2H22
We have to live with geopolitics and epidemic
Logistics won't be cheap anymore
An era of high inventory
Geopolitical climate is changing global semiconductor value chain
Industry watch: Semiconductor industry turning point beyond 2025
Industry watch: Ushering in a bright new era for semiconductor industry
Industry watch: The role of Taiwan makers in regionalized production