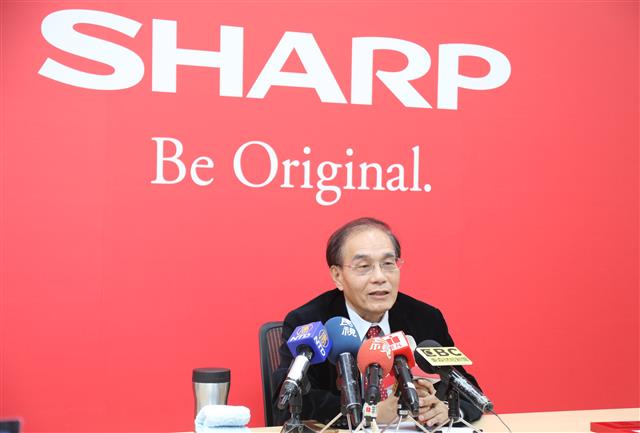 Sharp ranks 43rd on the 2022 edition of DIGITIMES Asia Supply Chain 100 (ASC 100), with a revenue of US$22.79 billion. Although its revenue lags behind the likes of Sony, LG Electronics, Panasonic, and Midea, with an annual growth of 715.5%, Sharp's profit ranks among the top. Sharp is also the only brand company in the ASC 100 top 50 led by a Taiwanese.

In an exclusive interview with DIGITIMES, Sharp chairman Jeng-wu Tai, who laid the foundation for Sharp's turnaround, and Po-hsuan Wu, who took over as Sharp's CEO in April, shared their thoughts on Sharp's development in recent years and prospects for the future market.

When it comes to competition and pressure in the global market for a Japanese brand like Sharp, Wu said both opportunities and threats coexist. In the past, Sharp mainly focused on the Japanese market, where it still has a good market share. Now, the company is focused on how to expand its market share overseas.

Over the last six years, Sharp has done well in Southeast Asia. By expanding market sales and through structural reform in the region, Sharp has witnessed a growth rate of 10-20% each year. Next, Sharp will focus on Europe, the Americas, the Middle East and Africa.

However, Wu acknowledged that the market is facing unprecedented challenges, such as semiconductor-related shortages, rising logistics costs, lockdown policies in China, the war in Ukraine, and depreciation of the Japanese yen, which is putting inflation pressure on the Japanese market, and all of which is impacting production.

Wu emphasized the need to be faster and more flexible than their competitors. In the face of challenges, adjustments and reforms must be made. For example, when introducing new products, speed is necessary, as is the ability to quickly adjust and respond to prices to reduce the possible impact of the yen depreciating.

Tai emphasized that having the supply chain all in one region, such as China, is too risky. To disperse risks, they must be able to obtain information quickly to immediately formulate plans based on current situations.

Since setting up a supply chain is not easy, Wu said Sharp has adopted a flexible approach to R&D and production. Not only will Sharp's production lines manufacture self-developed products, they will also work with OEM/ODM partners.

Wu refers to this approach as "walking on two legs," and it allows Sharp to diversify manufacturing risks.

Wu noted that Sharp's supply chain in Southeast Asia is not new; development started when Tai took over as chairman and has been around now for 3-5 years. It has been particularly effective during the pandemic and lockdowns in China.

When Shanghai was put under lockdown, Sharp's facility in Thailand took over production, with materials originally meant to be shipped to Shanghai transferred to Thailand, said Wu. The rapid shift of production to its Southeast Asian production line in Thailand helped reduce the impacts from the lockdown.

In terms of developing new markets, Wu said Sharp will consider and prioritize market opportunities in various regions, looking at product development and design, as well as supply chain and manufacturing.

Wu believes that making moves to reduce risks, such as decentralizing production to various regions, not only optimizes costs but also increases the value of local supply chains.

After reclaiming brand authorization in 2019, Sharp has started selling TVs in the European market again, according to Wu. Brand image will be given priority in sales. The company is also fully prepared to take on market competition.

In North America, Sharp will promote its TV products in 2022, said Wu. It also already has smart kitchen products and solutions in the region, which will eventually be expanded to the European market.

Sharp is rebuilding its brand recognition in Europe and the Americas.
Photo: DIGITIMES

In addition to consumer products, Tai said Sharp's enterprise B2B sales turnover from photocopiers, projectors, and large-size panels in Europe and the Americas is actually larger than that in the Asia market, including Japan. This is proof of Sharp's long-standing development of enterprise products in the European and American markets, and shows that previous losses were only on the consumer side.

Tai emphasized that after taking over Sharp, he changed the company's previous direction, deploying new strategies to gradually achieve certain results. For example, in Europe, Sharp introduced its home appliances into the market and TV sales gradually returned to more than two million units annually. Home appliances are still Sharp's focus in the North American market, with TVs soon to follow.

As to market development, Tai said Sharp is pushing solutions. For instance, Sharp is leading other companies in promoting a variety of smart home applications in the Japanese market. In regard to B2B solutions, Sharp is not only focusing on developing solutions but is also entering the IT service field. Tai pointed out that during the height of the COVID-19 pandemic in Europe, Sharp maintained its revenue in the region with its various IT services.

In the face of the localization trend, how can existing Asian supply chain partners create value for Sharp? According to Wu, it is important to Sharp that it maximizes its external resources.

Sharp has its own in-house design and production but also utilizes external resources, working with its partners in an effort to diversify risks. Additionally, if a production bottleneck occurs somewhere, it can quickly mobilize its second or third supply chains, or supply chains in various regions, to help resolve the issue.

While the migration of supply chains to Europe and North America is not impossible, it is unlikely to happen in the short term, according to Tai. He attributes this not only to geopolitical factors, but also practical issues such as regulations, environment, and cultural differences.

Tai believes these practical issues will deter supply chain companies from moving to Europe or North America. However, some countries, such as Germany, which has a rich industrial history, will appeal to some companies.