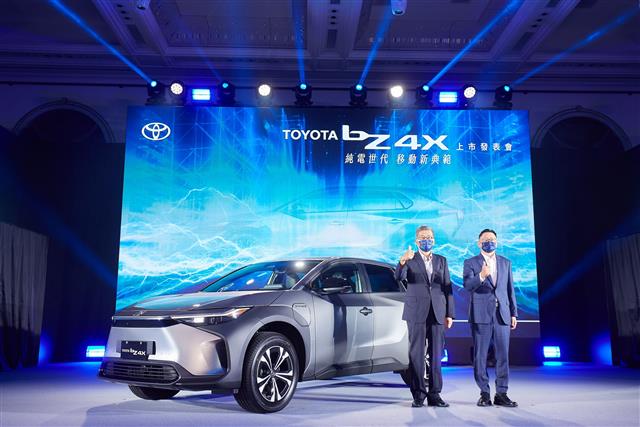 As the most popular car brand in Taiwan, Toyota hopes its BEVs can reach as many people as possible, and it will launch various types of alternative fuel vehicles in the future, Hotai president Justin Su said.

The bZ4X is the first Toyota model built through e-TNGA, a BEV-dedicated platform that can curtail the costs of BEV design, production, and manufacturing, Hotai said.

The e-TNGA platform with modular design can adapt to different needs, allowing developers to build cars with varied lengths, widths, and wheelbases. That is why Toyota is confident about its ability to launch 30 BEV models in this decade.

Compared with its sister model Toyota RAV4, the bZ4X model features high body rigidity, a low center of gravity, a spacious cabin, and a high-performance suspension system. The battery pack, the costliest and heaviest part of an EV, is a structural member of the chassis - a feature that creates a lower center of gravity and enhances a car's stability and safety.

Toyota has fortified protection structures around the battery pack. In the event of a collision, the bZ4X model's body can absorb and disperse the shock to reduce damage to the battery pack , Hotai said.

The battery pack adopts a structure that separates coolant and battery components, in a bid to prevent fire in case the coolant leaks and causes a fire in the circuits. The car is also equipped with a system that can monitor the changes of its voltage, electric current, and temperature changes and issue a warning if the battery system overheats.

Its road sign assist (RSA) can recognize through camera the speed limit of the road that the driver is on, and it can connect to the ACC feature to help the driver avoid speeding.

With its experience of developing hybrid electric vehicles, Toyota has partnered with Panasonic to develop high-quality BEV battery, sources familiar with the matter said.

The bZ4X model contains a battery pack with a capacity of 71.4 kWh that can support a range of up to 626km. Its fast-charging system goes with the CCS1 standard and takes only about 30 minutes to recharge the battery to 80% of its total. Its slow charger applies the SAE J1772 standard.

There are more than 1,000 public charging piles in Taiwan.

To prepare for the bZ4X model's launch, Hotai worked with Shilin Electric to build another 80 charging stations. It has also partnered with Fortune Electric Value, aiming to increase the number of chargers for Toyota car owners to 150. Hotai will launch a mobile app for BEV owners, so they can check the locations of chargers via phones.

Hotai also launched an app for ordering Toyota cars online. Toyota gave Hotai 300 units of the bZ4X model, while all of them have been booked just in 30 mintutes after Hotai started taking orders on May 17, Taiwanese media reported.

Su said Toyota has promised to supply more units to Taiwan once car shortages improve. It does not plan to launch another BEV model this year though, while EV development in Taiwan needs more observsation, he added.

Generally, the lead time of cars is delayed due to materials shortages that are aggravated by COVID-19 curbs in China, with imported cars affected most. Domestic carmakers are not immune to the impacts, as they have to import certain components from China, he said.

Due to escalating COVID infections in Taiwan over the past month, the number of visitors to Hotai's showrooms has dropped drastically, and yet visitors signed contracts faster, Su said.

Consumers are concerned about possible price hikes and late delivery amid materials shortages, so they tend to make quicker decisions, he noted.