Enhanced and scalable LiDAR at CES 2022 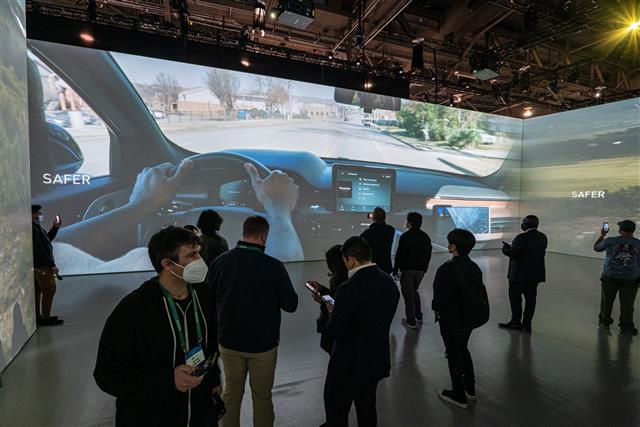 LiDAR companies continue refining the technology to help autonomous vehicles "see" more details and more clearly under any conditions. The idea was reflected by Valeo's third-generation LiDAR scanner, Scala 3, which the company debuted at CES this year.

Valeo said the product provides a high-quality 3D real-time image with 4.5 million pixels and 25 frames per second. Compared with Scala 2, Scala 3's resolution has been increased 12-fold, the range 3-fold, and the viewing angle 2.5-fold.

The new LiDAR can see things that humans, cameras, and radars cannot. Valeo said Scala 3 delivers all the features of Scala 2 and more, even on a highway at speeds up to 130 km/h.

Scala 3 can function well in dazzlingly bright or pitch-black light conditions, according to the company's press release, and can measure the density of raindrops to calculate the right braking distance. It also can anticipate nearby vehicles' trajectories through algorithms even when they are not in the driver's line of sight, prompting safety maneuvers.

Valeo said the third-generation LiDAR will be available on the market in 2024.

Innoviz introduced a LiDAR sensor containing up to 1280 scanning lines

Innoviz brought its next-generation 360-degree LiDAR, Innoviz360. According to a press release, Innoviz360 allows multiple scanning software configurations with up to 1280 scanning lines, significantly outperforming its traditional counterparts, which contain up to 128 scanning lines.

The Israel-based company also said it has considerably cut the cost of Innoviz360; samples are expected to be available later this year. The LiDAR will facilitate Level 4 to Level 5 autonomous driving, including robotaxis, shuttles, and various non-automotive applications.

At the CES event, the US-based Innovusion showcased its long-range LiDAR, Falcon, and its short to mid-range counterpart, Robin. According to the company, Falcon is an image-grade LiDAR with a detection range of 500 meters that can be customized to meet any vehicle's need.

Innovusion said Falcon has been selected by NIO as the standard LiDAR for its autonomous sedan, ET7, and will be delivered in Q1 2022.

"After the start of production in 2022, our yearly LiDAR volume produced with our advanced production line can reach 100,000 units per year with higher volume possible after a few months of capacity expansion and will be able to support future demand from global OEMs," Junwei Bao, Innovusion's co-founder and CEO, said.

The size of bulky LiDAR devices can be inconvenient for many car designs, which has affected the technology's adoption in the automotive industry. Innovusion, along with its competitors, has researched the issue and offered solutions.

The company said its short to mid-range LiDAR, Robin, has a height only of 35 mm and offers 360-degree vehicle coverage. The lightweight device can be integrated into a car's side fender, headlights, rear lights, or bumpers.

Lumotive demonstrated how LiDAR might integrate with mobility products

Lumotive collaborated with ZKW Group, an Austrian lighting systems and electronics provider, to demonstrate a design that places a LiDAR device in a vehicle headlight.

According to Lumotive, the functional demonstration featured a prototype of the company's M30 module and Meta-Lidar platform using pulsed laser beams to measure distances between objects and the sensors.

The M30 is a golf-ball-sized LiDAR device that provides a 120°x 90° field of view and consumes little power, according to Lumotive's website. However, the device's detection range is about 20 meters.

The Seattle-based company said its Light Control Metasurface (LCM) solid-state beam steering chips significantly reduce the complexity, cost, and size of LiDAR systems. An exclusive feature of the Lumotive Meta-LiDAR platform is that its LCM technology allows customization of the LiDAR scan pattern, frame rate, and resolution for idiosyncratic use cases in real-time.

South Korea-based SOSLAB introduced its solid-state Mobility LiDAR (ML) to the market at CES 2022. According to the company's website, its ML sensor, with its advanced and switchable modular optics, provides accurate data even if its angle changes from 20° to 180°. It also can receive signals returning from up to 200 meters away.

Luminar partnered with Volvo for developing an autonomous driving feature

Aside from announcements of advanced technology, LiDAR companies announced notable partnerships with automakers at CES 2022. Luminar and Volvo Cars announced a plan for an electric SUV that will be revealed later this year. Luminar, Volvo Cars, and AD software company Zenseact are collaborating to develop Ride Pilot, an unsupervised AD feature for Volvo Cars.

According to Luminar, Ride Pilot will include its Iris LiDAR and perception technology from its Sentinel solution. Iris is Luminar's auto-grade LiDAR; Iris enters series-production programs beginning in 2022. It features camera-like resolution greater than 300 points per square degree and its slim design facilitates integration with a car's roofline.

Volvo said Rider Pilot would be available as an add-on subscription for its next electric SUV and would be applied to highway driving in California first. The carmaker intends to begin testing on roads in California by the middle of 2022.

Categories
ADAS/AV Auto components
Tags
ADAS Auto components AV CES CES 2022 EV + green energy Innoviz LiDAR South Korea startup Valeo
Share this article
Other links
Print
Related content
Related stories
Carmakers explore sensor options for autonomous vehicles
NXP to focus on imaging radar of self-driving vehicles
Nissan to equip all vehicles with LiDAR in 2030
Related topic
Innovations
Looking for startups?
Startup database
Profiles of startups from Taiwan and around the world: their technologies, product developments, fundraising rounds, etc. All startups are welcome to register their profiles - free of charge.
Register
Accelerators & incubators
Information about accelerators and incubators from Taiwan and around the world that are mentoring startup businesses and teams. All mentors are welcome to register their info - free of charge.
Register
Events calendar
Major events, including those organized by the government, DIGITIMES, and others, featuring startups, innovative technologies and products from Taiwan, Asia and around the world.